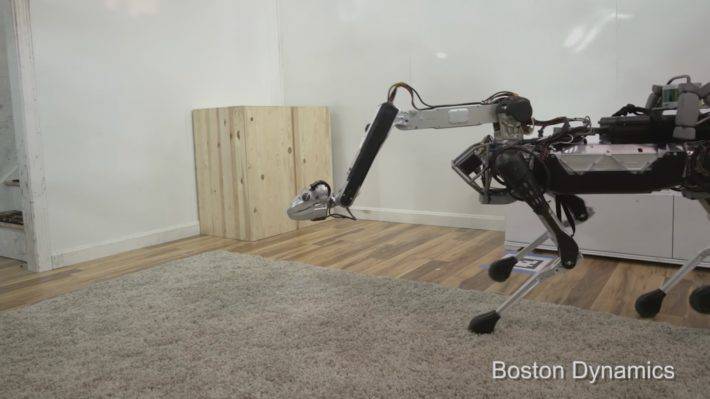 Boston Dynamics, the Alphabet-owned robotics company that recently took a dire blow in the form of losing a high-dollar military contract is still hard at work. To prove that, they've unveiled the SpotMini, a smaller variant of the Spot robot that weighs in at only 55 pounds, or 65 with an optional arm. SpotMini is more of a house-friendly robot than its bigger cousin, unable to play the "beast of burden" role quite as well as it plays the "loyal robot dog" role. While its possible applications in various fields like health, enterprise, construction and perhaps even military are certainly numerous, being smaller and quieter than the Spot unit that cost them the contract, a new video from Boston Dynamics shows off its possible homefront uses with a bit of personality and, in all honesty, is nothing short of just plain cute.

The new SpotMini is shown to stand roughly a foot shorter than the standard Spot unit and is able to crawl underneath its larger cousin with a bit of crouching. In the video, SpotMini proceeds to make its way around a table where a couple of people are talking, its loyalty rendering it willing to bump awkwardly into a wall to keep itself from interrupting their chat. The little robot busts out an adorably decorated arm, made to look like a head on a long neck, to load a dishwasher and throw away a stray root beer can. Then, bounding eagerly through a hallway, SpotMini proceeds to show us all that there's something intrinsically satisfying about the old banana peel gag from the classic cartoons, even when a dog-sized robot is the one taking the spill. If you happen to be a robotics engineer or tech buff, it's even more satisfying to watch SpotMini peel itself from the hardwood and soldier onward.

After taking a leisurely stroll about the grounds, SpotMini rounds out the video by offering a human a root beer can, only to decide it would rather keep it and end up puncturing the can, depriving both itself and the human of the can's contents. As lighthearted in tone as Boston Dynamics' video may have been, SpotMini is no mere plaything; it is every bit as advanced as the full-size Spot unit, but in a much smaller package that can fit in a large number of places, operate more quietly, and use less energy. Overall, the little bot runs for about 90 minutes on a single charge, which is impressive given its all-electric systems. A number of sensors in the limbs keep the little bot light on its feet and well aware of what's around it, lending to the possibility of mapping or reconnaissance use. SpotMini can even be automated to a certain degree, though some tasks still require human guidance.