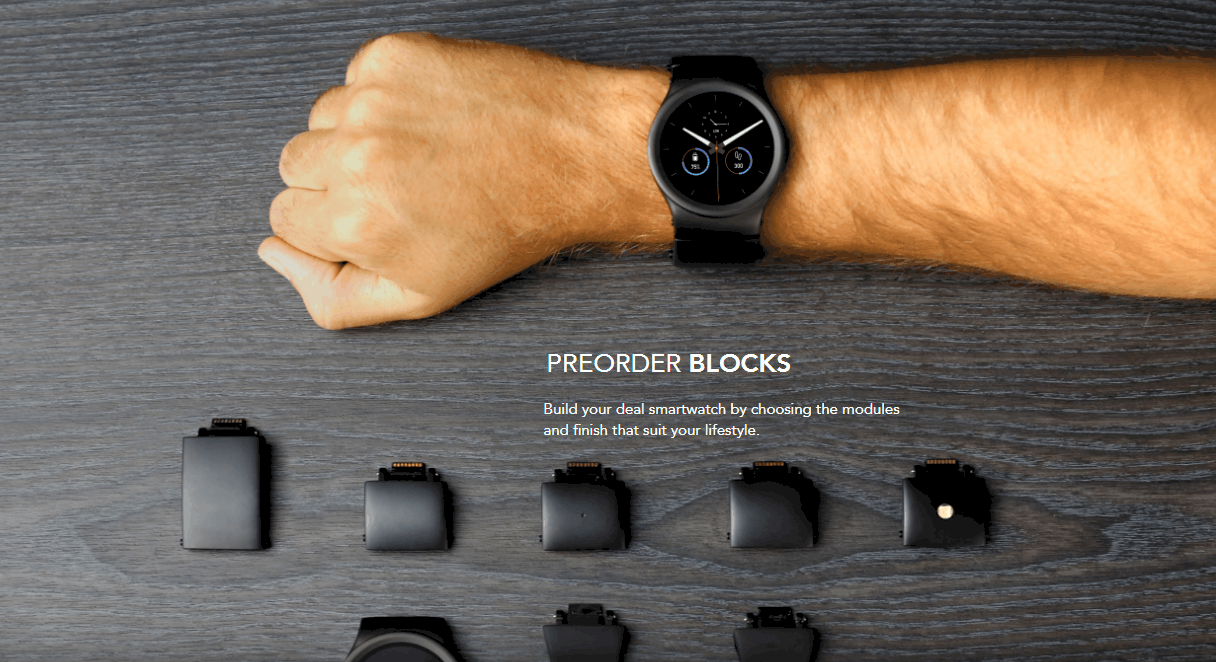 The idea of modular smartphones caught on several years ago when the PhoneBloks concept was revealed to the world by Netherlands-based designer Dave Hakkens. The concept inspired Motorola to create Project Ara (back when Motorola was a Google company), and now the aforementioned project is owned by Google. However, the idea of building modular smart devices has spread into other market niches too, and last year "BLOCKS" launched a Kickstarter campaign with the goal of creating a modular smartwatch. Needless to say, the Kickstarter campaign was a success and the modular smartwatch in question is now "undergoing final testing prior to mass production".

Much like Project Ara, the BLOCKS modular smartwatch consists of a "core" module which cannot be customized. The core module includes a 1.39-inch circular AMOLED display with a resolution of 400 x 400, a Qualcomm Snapdragon Wear 2100 chipset, 512 MB of RAM, 4 GB of on-board memory, and a 300 mAh battery. The module also includes Bluetooth 4.1 and Wi-Fi 802.11 b/g/n modules, along with a gyroscope, a 9-axis accelerometer, a vibration motor, and a microphone. Needless to say, the core module contains all the necessary components for a smartwatch to be fully functional, and doesn't seem to differentiate itself too much from regular smartwatches. However, the interesting thing about BLOCKS is that the core module can be connected to a strap made of multiple modules. These modules snap together to create a custom wristband, and there are a variety of modules to choose from, including a heart rate sensor, a flashlight, a GPS module, an extra battery module, a barometer / environment sensor, and a programmable button. One could even snap together a series of battery modules to create a wristband and increase battery life considerably. Aside from these modules which will be available at launch, BLOCKS also intends to release a SIM card module, a fingerprint scanner, a body temperature monitor and stress level sensor, an ECG module, and an NFC module just to name a few. According to the product's creators, wearers with small wrists should be able to create wristband containing up to 4 modules, along with the wrist buckle and core module, whereas wearers with larger wrist could be able to put together up to 5 modules and create a larger strap. Last but not least, it should be noted that BLOCKS does not run Android Wear, but instead, it relies on a customized version of Android 6.0 Marshmallow with support for activity tracking, voice controls, watch faces, and notifications from connected smartphones.

BLOCKS is now testing the final product for mass production and expects the smartwatch to be shipped this fall. The official video below offers a preview of what could be the final product, and prospective customers can already preorder BLOCKS along with four modules for $330 by visiting the source link below.