Each month the latest figures come in from various data agencies and from Google and these reports do provide a good level of insight into the current look of the Android landscape. The latest of which has now come through today from the Android team. This is the Android Distribution report and looks to identify the current distribution of Android across devices. In terms of the latest figures, one particular aspect which has continually hit the headlines is the slow adoption of the latest version, Android 6.0 (Marshmallow). As a result, the big headline aspect of the latest data set is that Marshmallow has now passed through the 10-percent barrier. Although only barely as Marshmallow now currently sits at 10.1-percent. While this is essentially the same month-over-month increase as before (with May’s figure being 7.5-percent and April’s being 4.6-percent), in many respects it is a significant milestone as it officially sees Marshmallow hitting double figures for the first time since it was released back in October of last year.

Moving to the rest of the figures and Android 5.0 (Lollipop) has for the last few months been in a slow decline and this is a trend which continues this month. Last month, Lollipop rested at 35.6-percent and now Lollipop sits at 35.4-percent. So while it is a decline, it is not a massive one. This breaks further down as 15.4-percent for Android 5.0 and 20-percent for Android 5.1. Which interestingly means Android 5.0 declined (down from 16.2-percent) while Android 5.1 increased (up from 19.4-percent) compared to last month. Android 4.4 (KitKat) also sees a decline with its latest figure coming in at 31.6-percent (down from 32.5-percent last month). 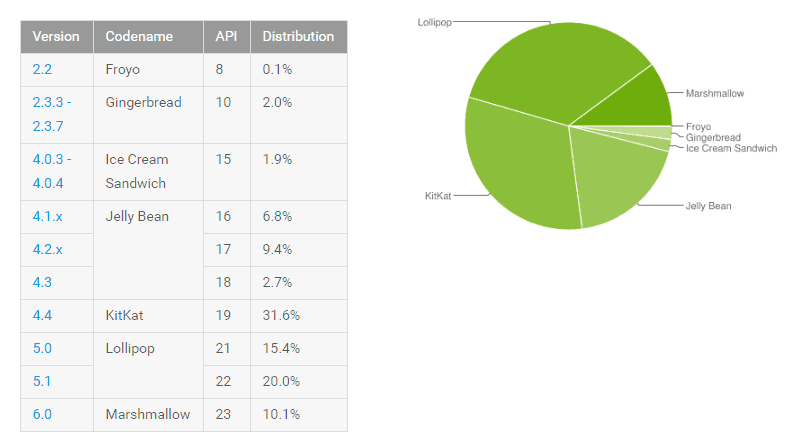