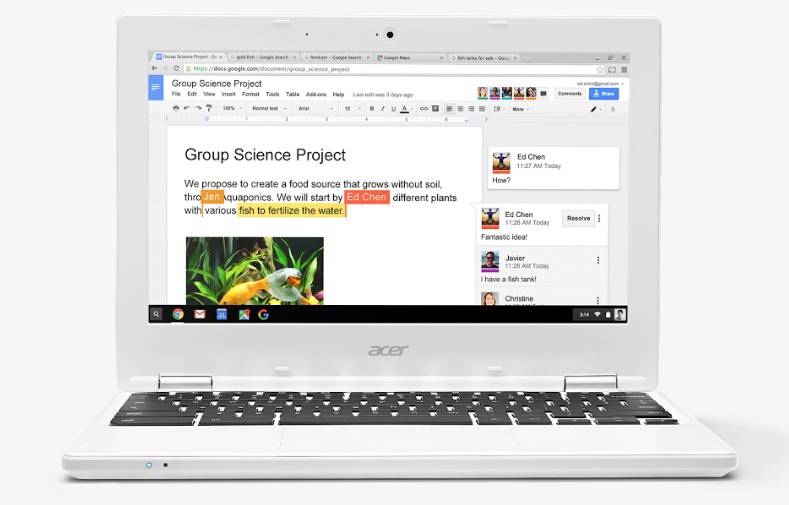 Chrome OS devices continue to be big sellers and are certainly carving out a unique position within the wider laptop and PC market. One of the reasons for this is their ability to combine pretty good specs with very good prices and so you can pick up a very nice-performing device for not a lot of money. If you do happen to be in the market for a new Chromebook, then it looks like two of the latest arrivals from Acer have now made their way to the Google Store. The first is the 2016 version of the Acer Chromebook 11 and the second is the newly arrived Acer Chromebook 14. Generally speaking, both are very competitively priced Chromebooks as the Acer Chromebook 11 (2016) through the Google Store will set you back $179.99, while the larger Acer Chromebook 14 currently costs $299.99.

Moving to the larger of the two latest arrivals, the Acer Chromebook 14 and this one comes boasting a 14-inch display which makes use of a 1920 x 1080 resolution. Inside, the Chromebook 14 is equipped with 4GB RAM, 32GB SSD storage and is powered by an Intel Celeron (N3160) quad-core Processor (clocking at 1.6 GHz), As well as the display being bigger, so is the battery as this one looks to offer 12 hours of usage between charges. Not to mention, this one also comes equipped with a HD webcam and the same ports (although both USB ports on this model are 3.0 ports). In terms of the physical dimensions, this one measures 341 mm by 236.6 mm by 16.95 mm and weighs in at 3.39 lbs. As mentioned, both are now available through the Google Store, although they both can currently be picked up through Amazon as well.