Benchmarks are a funny thing. While they do typically provide the market with insight into the specs of a device, they can also be quite contradicting and at times, misleading. For instance, in the run up to the release of the OnePlus 3, benchmarks were being spotted everywhere for OnePlus devices. As such, it was largely thought that multiple variants of the OnePlus 3 were on the way with the main differences between them being size and RAM capacity. However that was not the case with OnePlus releasing just the one model of the OnePlus 3 and all but confirming there will not be other smartphones coming through, including a successor to the OnePlus X.

Besides the size difference, it does seem to be the case that all of the other specs fall directly in line with the OnePlus 3. So we are talking about a 1920 x 1080 resolution display, 6GB RAM, Snapdragon 820 processor, 64GB internal storage, 16-megapixel rear camera, 8-megapixel front-facing camera and Android 6.0 (Marshmallow). Therefore, the assumption would naturally be that this is the OnePlus 3 but bigger, like a ‘Max’ version or a ‘Pro’ or some other derivative which emphasizes a larger display. Of course, whether that is actually the case remains to be seen. It is also worth pointing out that this benchmark seems to be lacking a few fundamental aspects. For instance, there is no model number attached at all, which is usually a giveaway and instead this one is simply listed as a ‘OnePlus unknown’ device. Not to mention, while the device is listed as running on Android 6.0.1, it is also listed with CyanogenMod, not OxygenOS which comes running on the OnePlus 3 or even Cyanogen OS which is the commercial arm of Cyanogen. That all said, the benchmark is shown below for those interested in taking a closer look. 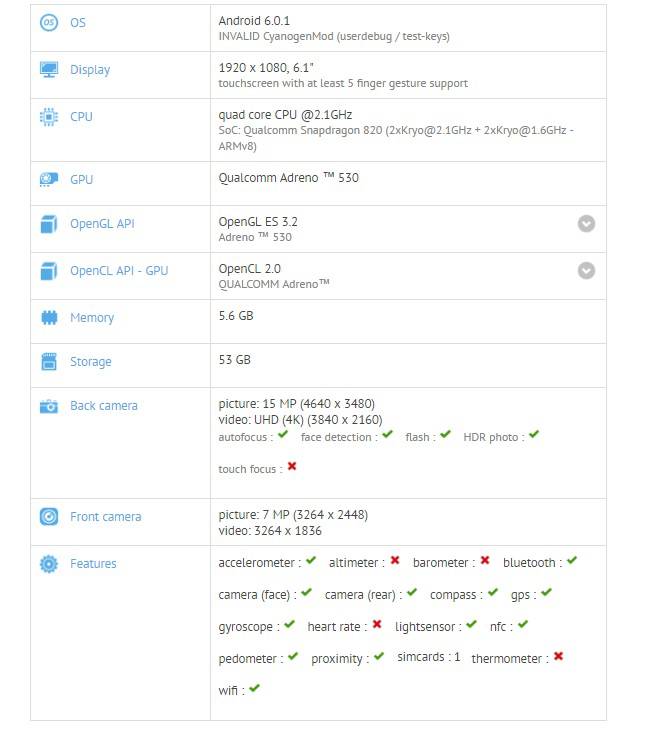