ZUK is a Lenovo-backed company which has introduced two smartphones thus far, the ZUK Z1 which was introduced last year, and they have recently announced the ZUK Z2 Pro. Lenovo has released the ZUK Z1 in India yesterday as the ‘Lenovo Z1’ (also called ‘Lenovo ZUK Z1’), and many people were wondering when will the international variant of the ZUK Z2 Pro going to be announced. Well, we still don’t know when will the company share more information on that front, but a new ZUK-branded device did pop up on GFXBench recently, read on.

The ZUK R1 surfaced on GFXBench not long ago, and it seems like this will be the company’s mid-range offering, and also a smaller smartphone for the masses. The ZUK R1 sports a 4.7-inch 720p (1280 x 720) display, 3GB of RAM and 32GB of native storage. The phone is fueled by MediaTek’s Helio P10 (MT6755) 64-bit octa-core processor running at 1.8GHz., along with the ARM Mali-T860 GPU. The 13-megapixel shooter is placed on the back of the ZUK R1, and an 8-megapixel snapper can be found up front. Android 6.0 Marshmallow has also been listed on GFXBench, and interestingly enough, ‘Android Google Play Edition’ caption can be found underneath the Android version. This seems very odd considering this is not exactly something we see on GFXBench, it could be nothing, but on the other hand it might indicate that the device will ship with stock Android on board. We’ll have to wait and see what happens, though chances are that the ZUK R1 will sport ZUK’s ZUI user interface in China, and Cyanogen OS when it comes to the international version.

That is more or less it, at least for now. It seems like ZUK is planning to release not only a more affordable device, but also a smaller alternative to their ZUK Z1 and ZUK Z2 Pro smartphones. Considering how affordable their ZUK Z2 Pro flagship is, you can expect the ZUK R1 to be really, really cheap. We’ll make sure to let you know as soon as more info surfaces, so stay tuned for that, as always. 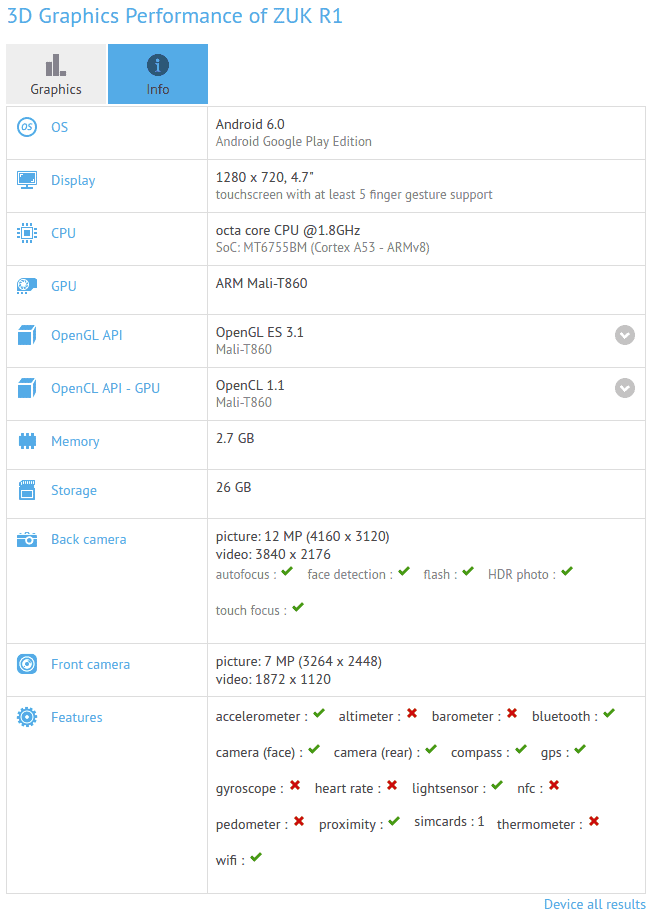