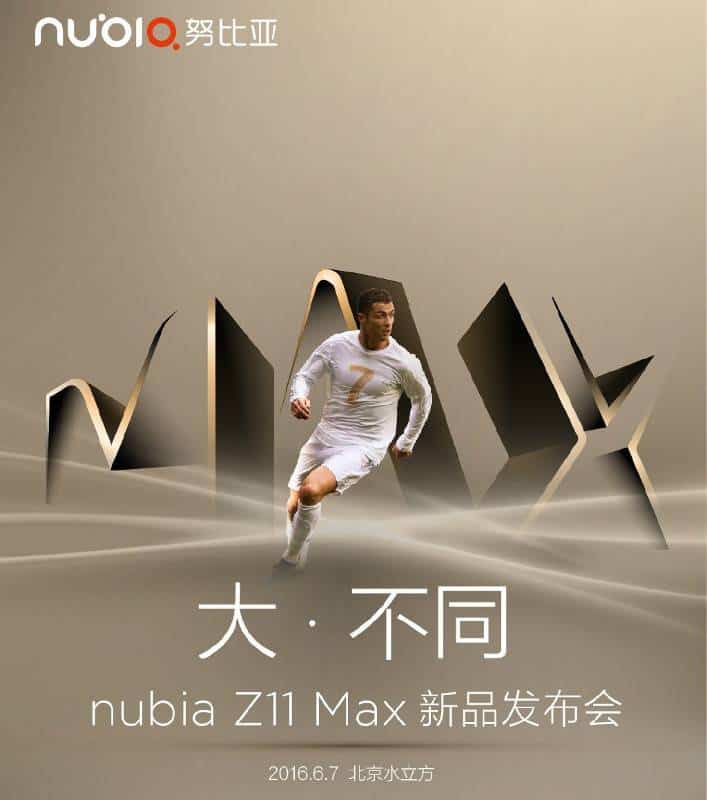 Nubia is ZTE's subsidiary. This company has introduced quite a few smartphones thus far, though they are mostly available only in China. Nubia has launched the nubia.com domain back in January this year during the Consumer Electronics Show (CES), which suggested that they're planning to push their brand to more markets outside of Asia. That being said, nubia has introduced the nubia Z11 Mini handset recently, and the nubia Z11 and Z11 Max have been certified by TENAA earlier this month. We were wondering when will the company introduce these two smartphones, and it seems like the nubia Z11 Max might launch soon, read on.

Nubia has confirmed that the Z11 Max will launch on June 7th. If you take a look at the company's teaser image, you will not only notice the 'nubia Z11 Max' confirmation and the launch date, but also a footballer. This footballer is Cristiano Ronaldo, one of the biggest stars of football (soccer) these days, and a member of Real Madrid. In case you missed the news the other day, Cristiano Ronaldo has become nubia's brand ambassador, and it seems like the company has already started using him in their promotional content. Now, if TENAA's listing is to believed, the nubia Z11 Max will ship with a 6-inch fullHD (1920 x 1080) display. This phablet will be fueled by the Snapdragon 652 64-bit octa-core processor, along with the Adreno 510 GPU. The 16-megapixel snapper will be placed on the back of this phablet, and an 8-megapixel shooter will be available up front. The 4,000mAh battery will also be a part of this package, and you'll also notice that the fingerprint scanner is placed on the back of this phone. Android 5.1.1 Lollipop will come pre-installed on the device, and the Nubia UI will be available on top of it. This phablet will also pack in 4GB of RAM and 64GB of expandable internal storage. You can also expect nubia Z11 Max to ship with two SIM card slots and 4G LTE with VoLTE.

There you have it. We not only know what the device will look like once nubia launches it, but also its specifications. TENAA is equivalent to the FCC, so their info is usually spot on. Either way, stay tuned for more info, we'll report back soon.