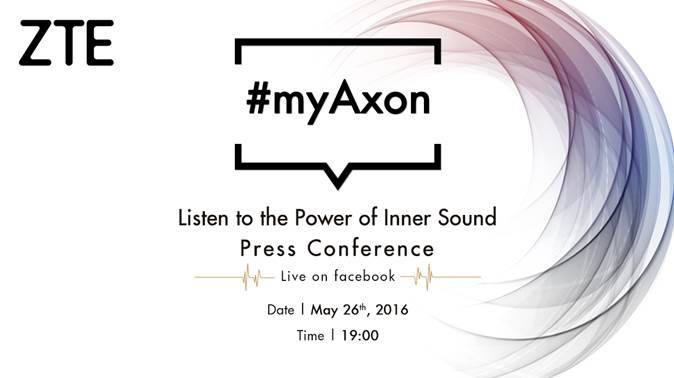 ZTE has introduced quite a few Axon-branded devices last year. These are the company's Android-powered devices which include not only smartphones, but also a smartwatch which the company introduced in Asia. A number of Axon-branded smartphones have been released outside of China, and we've reviewed quite a few of them last year. That being said, the company's new Axon7 flagship has been leaking like crazy over the last couple of weeks, and the company has released a number of teasers already. ZTE has already sent out May 26th event invites for the Axon unveiling, and now they've released some additional info regarding that event, read on.

ZTE has reached out to us confirming that they will live stream the event. The company says that they're preparing a Facebook live event on ZTE Device's Facebook page for the global launch of the Axon7 device. The event will start at 7PM (China time), and will last for two hours, said the company. ZTE has even confirmed that this is a 'flagship launch' event, and has once again shared the 'Listen to the Power of Inner Sound' tagline which was used in one of their recent teasers. Now, this phone has already been certified by TENAA (China's equivalent to the FCC) in China, which means we not only know what it looks like, but also what its spec sheet looks like. The Axon7 will feature a 5.5-inch QHD (2560 x 1440) OLED display, 4GB of RAM and 64GB of expandable storage. The phone will be fueled by the Snapdragon 820 64-bit quad-core processor, along with the Adreno 530 GPU for graphics. The 20-megapixel camera will be available on the back of the phone, and an 8-megapixel snapper will be placed on the device's front side. The 3,140mAh battery is also a part of this package, and the phone will be available in Gold color variant only, if TENAA's listing is to be believed. The Axon7 will measure 154 x 77 x 9.8mm, while it will weight 175 grams.

The Axon7 will resemble its predecessors quite a bit, but it seems like its bezels will be significantly thinner this time around. The fingerprint scanner will be placed below the rear-facing camera sensor, and judging by the design of the phone and ZTE's teasers, we can expect a set of front-facing speakers to be included here.