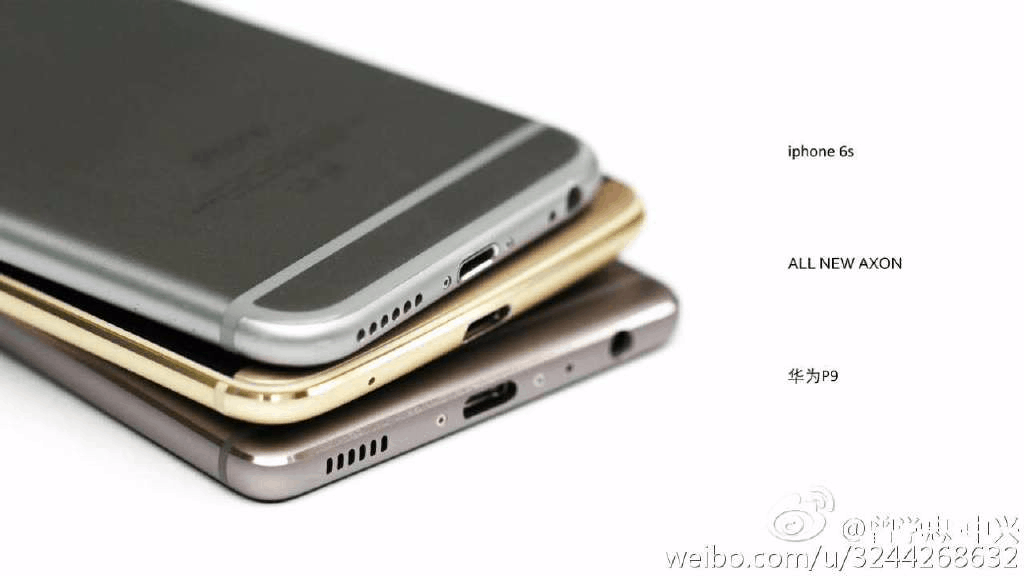 When it comes to Chinese smartphone manufacturers, ZTE is one name that American buyers might be more familiar with than most. A sponsor to teams in the NBA, as well as the firm responsible for a number of lower-end devices available on MVNOs and prepaid carriers, ZTE has made something of a name for themselves in the US. The ZTE Axon, released last Fall was a device that helped put ZTE in the minds of users all over the place, thanks to its decent spec sheet and affordable price tag. Since then, the Axon line has spawned some offshoots since then, but a follow-up device in earnest has yet to hit stores. The ZTE Axon 2 seems to be just around the corner however, having passed through TENAA certification and now teased by the company's CEO.

ZTE's CEO, Zeng Xuezhong, has taken to Weibo to share the above new photo of the Axon 2, comparing it to other devices currently on the market. Mr Xuezhong made comments on the photo compared the Axon 2's design to the iPhone 6S and Huawei P9 – pictured above and below the middle Axon 2 – detailing the lack of any screws compared to the new devices in question. As well as this, there's no headphone socket on the rear of the device, something that both the iPhone 6S and Huawei P9 have down at the bottom. The recent TENAA certification detailed the Axon 2 as a device with a Snapdragon 820 CPU, a Quad HD display, 4GB of RAM and 64GB of expandable storage as well as a 20-megapixel rear-facing camera to boot. This latest tease is something that we see a lot with Chinese companies looking to drum up some extra hype surrounding a looming product launch, which could be as close as the end of the Month with Computex being held then.

The Axon 2 has been leaked a number of times before and it's clear that the device is close to being officially announced. After all, only completed devices pass through the TENAA, China's equivalent to the FCC, which the Axon 2 did recently. With stereo front-facing speakers, the Axon 2 is a device that might capture the attention of those looking for a high-end device without the associated price tag.