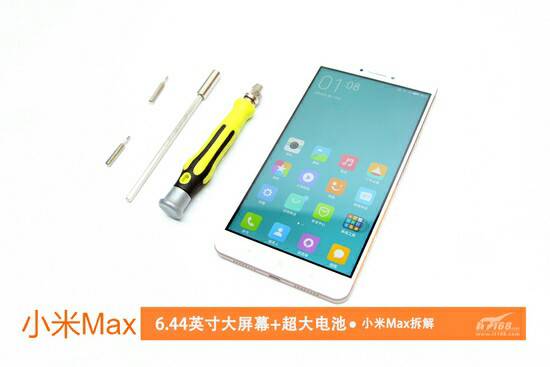 The Mi Max phablet is Xiaomi's newest device. This phablet was introduced a week ago alongside the MIUI 8 OS, and it seems like this phablet managed to grab people's attention. Consumers in China seem to be crazy about the device, over 10 million people pre-registered for the first flash sale of this phablet in the first 5 days pre-registrations were open. That being said, it seems like the first teardown of the Mi Max has surfaced online, let's check it out, shall we.

The first Mi Max teardown comes from a Chinese portal IT168, a site which we're quite familiar with considering they're usually the first ones to disassemble devices which are initially released in China. As far as the general teardown goes, the site didn't seem to have any issues with this device, and the build seems to be similar to some other Xiaomi-branded devices. This smartphone is made out of metal and plastic, and it shouldn't be all that difficult to repair it if something goes wrong. If you'd like to check out the full Mi Max teardown, you'll find all the images in the gallery down below. As you can see, the process is quite straightforward, and it didn't really take long for the source to access the Mi Max's bulky 4,850mAh battery which takes up most of the device's surface. This is actually a 3,85V battery, in case you were wondering, and it's quite bulky, but it has to be considering how large it is.

The Xiaomi Mi Max features a 6.44-inch fullHD (1920 x 1080) display, along with 3GB / 4GB of RAM and 32GB / 64GB of expandable internal storage. The device is fueled by the Snapdragon 650 / 652 (depending on the variant), and the Adreno 510 GPU. The 16-megapixel PDAF camera is placed on the back of the Mi Max, while you'll find a 5-megapixel snapper up front. Android 6.0 Marshmallow comes pre-installed on this phablet, and on top of it, you'll find the MIUI 8 OS. We've already mentioned that the 4,850mAh battery is available here, and it is not removable, in case you were wondering. The Mi Max measures 173.1 x 88.3 x 7.5mm, while it weighs 203 grams. The device comes in Black, White and Gold color variants, and it is quite affordable in China. In case you live outside of China and would like to purchase this phablet, click here.