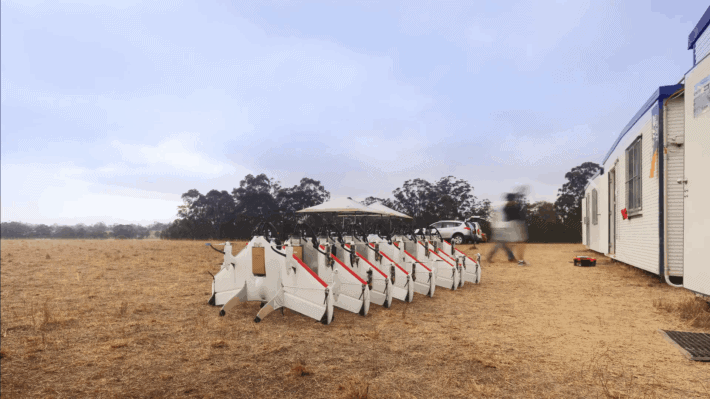 Drone delivery is a huge revolution facing huge challenges. Imagine a world where fleets of drones deftly navigate the urban sky, bringing goods from shipping center to shipping center, eventually landing at a buyer’s home. Retail stores of all sorts may eventually go the way of the dodo when a consumer can suddenly want diapers, high-end headphones, and a taco at 3 in the morning, and get those things in less than an hour without having to leave their home. Don’t expect to see any Walmarts or CVS Pharmacies disappearing in the very near future, of course; even if the technology was completely ready right now, it would face issues of logistics, lawmaking, mass adoption and, in all likelihood, opposition by corporate lobbyists before it would stand any chance of seriously disrupting the way consumers shop.

One of the players in the field that has been around for a while is Google’s own Project Wing moonshot. Among the first entities to get into the delivery by drone niche, Project Wing has been making serious headway in developing the technology needed to make drone delivery mainstream, as well as checking into the various legal matters and logistic nightmares associated with it. Their somewhat unique drones are lithe, agile, fast, and nicely sized to deliver almost any individual package that would normally end up on a mail truck. Their aerodynamic frame helps to save energy in flight and, when necessary, makes outside control fairly simple. It’s clear that a lot of love, and a lot of money, are part of the project thus far. Even with Google’s manpower, smarts, and financial might behind them, though, Project Wing has, as of yet, failed to get anything more than pilot tests done and have not shown clear dominance over others in the space. While some may say that they would be best served by getting it in gear and going all Google on the issue, it’s arguable that their efforts to further the space may go further for consumers, and even for them, than trying to play the hero and revolutionize the space on their own.

While some may wish they would do otherwise, it looks as though Project Wing is more focused on getting the technology to commercial readiness in the most stable way possible, hand in hand with others working on the same sort of thing. With help from NASA, as well as big players like Amazon and even the United States Defense Advanced Research Projects Agency, or DARPA, working on their own solutions to the delivery drone conundrum, it’s not hard to see why Google may have decided to take a backseat with Project Wing and devote a bit less resources than a normal moonshot; they’re not trying to solve a unique problem in a distinctly Googly way that nobody else is trying to solve, they’re helping to bring about the inevitable evolution of the delivery space. Just about everybody in the space points out some of the same reasons for getting into it and trying to make delivery drones happen. Less energy use, cutting down on fossil fuels, less traffic on the ground, faster deliveries, the list goes on and on, but the point is that, for once, just about everybody in the tech space who’s choosing to enter a new area is working toward a common goal. Even if they don’t directly share their work and developments with one another, more players in the space means that roadblocks will be taken down quicker and progress will be harder to stop.

Google’s latest promo video for Project Wing, which you can have a look at below, makes their outlook pretty clear. They’re in the space for the same reasons as everybody else. Delivery drones aren’t going to make their bottom line blow up, they’re not going to dominate a new market, they’re not going to monopolize a new purpose for a relatively old technology, they’re mainly doing this for philanthropic reasons. To be sure, there will be some profitability here, but not nearly enough to justify a separate department, if one thinks like a traditional businessperson. Instead, they assert that they’re throwing their engineering might behind a worthy cause that will be a huge help to humanity, and while that approach may not be as gung-ho as a new market space being moved in on would normally warrant, it is certainly Google, and there’s nothing wrong with that.