An all-new Alcatel smartphone has now popped up on both Geekbench and GFXBench revealing quite a bit about its hardware specs in the process. The device is named the TCL 950 on both the websites, but some online chatter seems to suggest that it is likely to be marketed as either the Alcatel Idol X or as a variant of the existing Alcatel Idol 4. Although the listed device seems to pack some really impressive hardware, it’s incredibly early in the process and without any official input regarding the matter from the company itself, it would be wise to take any suggestion about its eventual name with a pinch of salt. Either way, now that the TCL 950 has been leaked online in all its glory, let’s take a closer look at what’s to be expected from the upcoming device from Alcatel on the hardware side of things.

As per the listing on the GFXBench database, the TCL 950 will feature a 5.5-inch 1080p display panel. Both websites indicate that the upcoming device will be powered by the Qualcomm Snapdragon 820 MSM8996 SoC, which comes with an integrated 64-bit, quad-core CPU that incorporates 4 custom Kryo cores clocked at a maximum of 2.1 GHz. Meanwhile, the GPU in the device happens to be the Adreno 530. The TCL 950 is also believed to pack in 4GB of RAM and 64GB of storage, both of which are certainly flagship-worthy specs in the first-half of this year, although, devices in the latter half of the year are rumored to come with as much as 6 to 8 GB of RAM.

Coming back to the device in question, as per the listing on the two benchmarking sites, the upcoming Alcatel smartphone runs Android 6.0.1 Marshmallow out of the box and is expected to sport a 21-megapixel rear-facing primary camera that’s capable of recording 4K videos. Meanwhile, the front camera on the upcoming device is believed to be an 8-megapixel unit. The TCL 950 will apparently pack in a whole lot of sensors as well, including, but not limited to, a gyroscope, a pedometer and an NFC chip. As mentioned already, there’s no word from Alcatel as yet about its upcoming device, so we’ll have to wait to hear anything officially from the company before more is known. 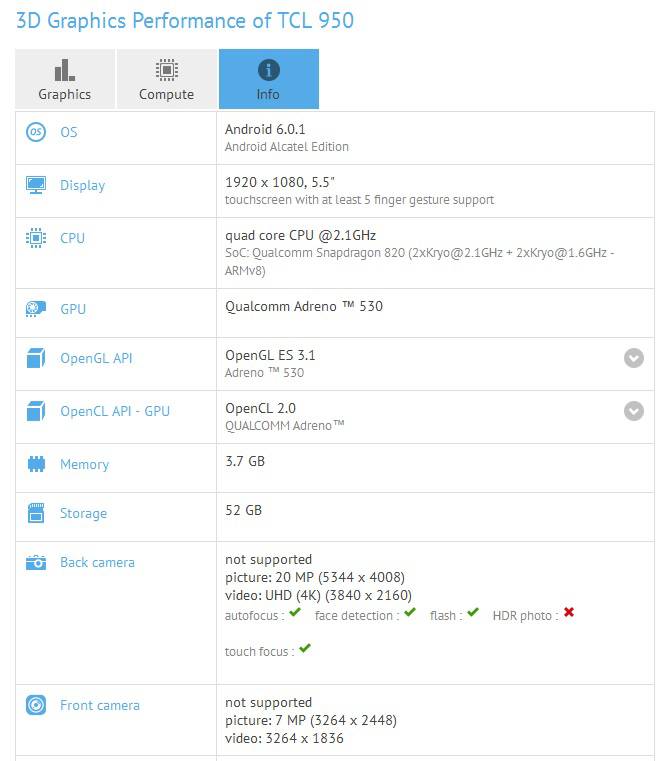