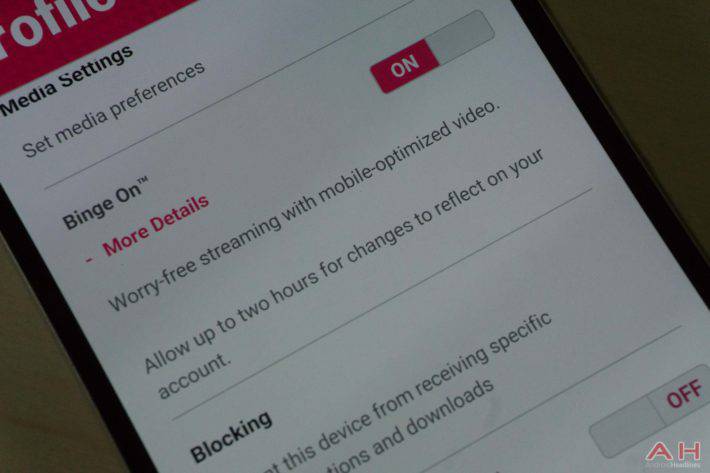 Carriers often come out with a number of features and services to try and maintain their current customer base and also attract new users. For instance, if you are of the Sprint persuasion and looking for a large amount of data to burn through, then their XXL plan now comes with 12 months of free Amazon Prime. However, if you are more of the T-Mobile way of doing things, then by far one of their most popular (and controversial) features is the 'stream all you want' Binge On service.

As the name suggests, Binge On is designed to allow T-Mobile customers to literally binge on as much streamed content as they want without having to ever worry about the cost of doing so. While this started as a service which attracted much debate on its Net Neutrality responsibility, the months since the launch of the service has seen it gain significant support from a number of streaming services and today, T-Mobile has confirmed the next batch of incoming supported services.

As part of the latest announcement from T-Mobile, those making use of Binge On can now also enjoy content streamed from the likes of Google Play Music, NBC, Qello Concerts, Spotify and Tidal. Of course, some of the more music-oriented services like Spotify and Google Play Music are already part of T-Mobile's other streaming service, Music Freedom, and so from that perspective, unless you are watching video from these providers, their inclusion will not be that important. Although their addition does add to the growing level of support for the service in general. In fact the list of newly added services is far longer and does include the likes of Great Big Story, Kiswe, Ligonier Ministries, NOGGIN, Radio Disney, Univision, Univision Noticias and Toon Goggles as well. Additions which T-Mobile has now stated sees the number of supported streaming services reaching beyond eighty in total. Which is not bad considering this is a service which only launched back in November of last year.

As well as the general update on supported services, T-Mobile also took today's announcement to detail just how popular the streaming service is becoming by noting that more than 377 million hours of video has been streamed so far by T-Mobile customers, as part of the Binge On service. Further adding that of a selection of T-Mobile customers surveyed, 92-percent said they were likely to stream more video due to the free-nature of Binge On. While T-Mobile also stated that 89-percent "of US wireless customers" said they would like to see a similar service being offered by their wireless service provider and 94-percent apparently stating they would be willing to try new streaming services if they were offered as part of a free service, such as Binge On. Statistics which are likely the reason as to why more streaming services are coming on board.