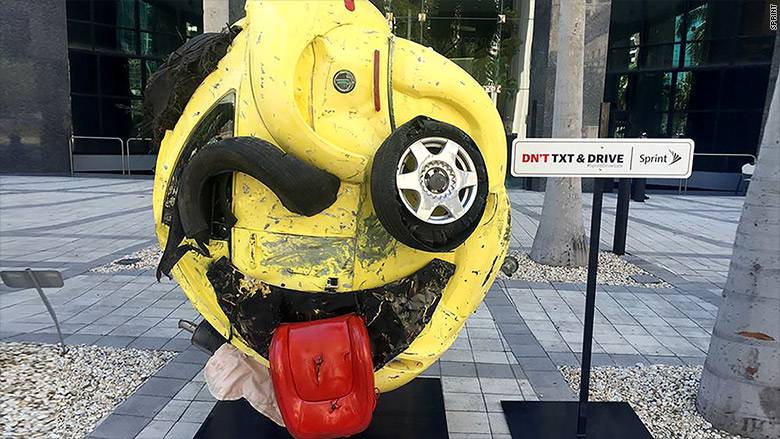 For quite a while, AT&T has stood against texting and driving, saying that it can wait. Now we're seeing Sprint jump on that bandwagon as well. Last month (April) was Distracted Driving Awareness Month, and Sprint put out a new sculpture in Miami, Florida. The sculpture is the one you see above. The sculpture sends a pretty big message. As it is a car that has been wrecked and turned into the winking emoji with its tongue sticking out. It depicts texting – seeing as almost all of us use emojis in our texts – and also the consequences of texting while driving. Which include wrapping your car around a tree or a utility pole, or something worse.

Sprint with their ad agency Alma, put the sculpture up in Miami on April 29th. The reason why they choose Miami is because Florida is one of the few States in the US that does not prohibit texting while driving as a primary offense. You can only get that citation if you were pulled over for something else. Something that definitely needs to change in Florida. Distracted driving can not only cause harm to yourself, but also those driving on the same streets and highways as yourself.

Those of you in the Miami area can go ahead and take a selfie with the sculpture which they are dubbing "The Last Emoji", and post it on social media using the hashtag #SprintDriveSafe, to raise awareness about driving and not texting at the same time. If you don't think that texting while driving is a big deal, take a look at this statistic. About 3,129 people were killed in 2014, from distracted driving crashes. And it's an easy thing to fix. Simply leave your phone alone until you are at your destination.

Sprint isn't the first wireless carrier to raise awareness around texting and driving, and likely won't be the last. It's a pretty cool sculpture that Sprint has put together, and there's no word on how long it will be sitting there in Miami or if it'll visit other cities around the country. Below there is a behind-the-scenes video about how the sculpture was built.