LeEco (formerly Letv) has released three devices at the end of last month, the Le 2, Le 2 Pro and Le Max 2. These three handsets are direct successors to the first three smartphones this company has announced, and they’re quite affordable actually. LeEco has a huge appetite for success, they’re not only intensively pushing their devices in the Chinese and Indian markets, but have also opened up LeEco headquarters in the U.S. quite recently, which suggests that they might start selling smartphones over there soon.

The LeEco Le 2, Le 2 Pro and Le Max 2 are all very powerful handsets, though the Le Max 2 is definitely the most powerful one. The Le 2 is a 5.5-inch smartphone, which sports 3GB of RAM and it is fueled by the Helio X20 64-bit deca-core processor. This smartphone ships with Android 6.0 Marshmallow out of the box, and packs in a 3,000mAh battery on the inside. That being said, it seems like LeEco has plans to release a lower-end Le 2 handset in the future, at least according to the recently surfaced AnTuTu listing. If you take a look at the screenshot down below, you’ll get to see the listing itself. Now, according to this info, the Snapdragon 652-powered LeEco Le 2 (LE X526) might be released in the near future. The rest of its specs will be identical as in the regular LeEco Le 2 it seems. You can expect this phone to ship with 3GB of RAM, 32GB of internal storage, and Android 6.0 Marshmallow out of the box. The 16-megapixel snapper will be placed on its back, and an 8-megapixel shooter will be available up front. It is also worth mentioning that the Snapdragon 652 64-bit octa-core SoC ships with the Adreno 510 GPU for graphics rendering, and that this is Qualcomm’s mid-range processor.

The original LeEco Le 2 costs 1,099 Yuan ($170) in China, and is quite affordable, as you can see, which means that the Snapdragon 652-powered variant will be even more affordable. You can expect this handset to cost less than $150 in China, though we still don’t know its exact price, nor when will it be officially announced, so stay tuned. 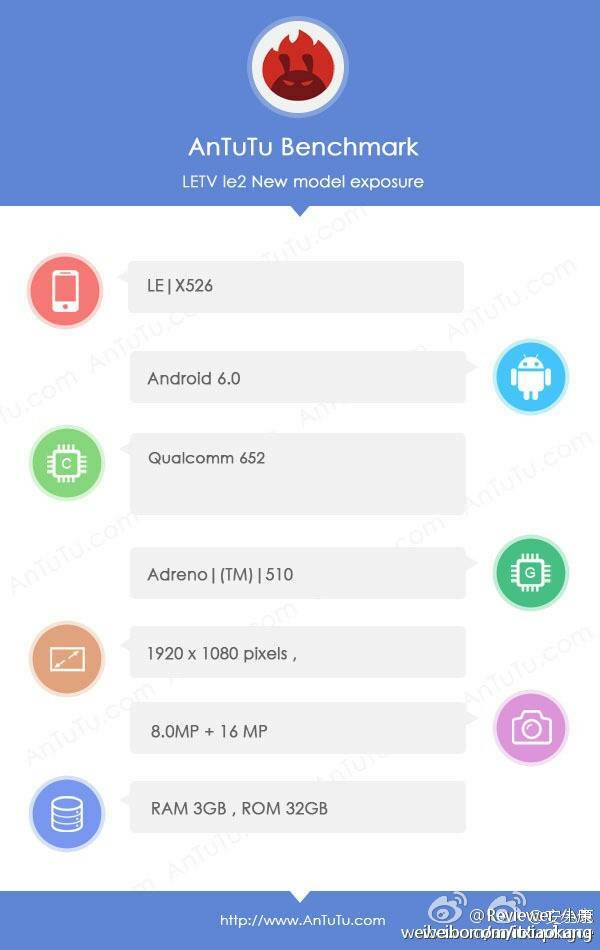