ASUS has introduced the first ZenFone 2 devices back in January last year during the Consumers Electronics Show (CES) in Las Vegas. Those devices have been selling pretty well in certain regions, and have surely helped ASUS to sell 20 million devices in 2015. That being said, the company is aiming to sell 25 million smartphones in 2016, and in order to do that, they’ll need to release quite a few compelling devices. Speaking of which, the ASUS ZenFone 3 was originally expected to arrive in January, but that did not happen. We were wondering when will ASUS announce their new flagship handset(s), and according to the latest info, that might happen at Computex 2016 which kicks off at the end of this month.

This Taiwan-based company has already teased the arrival of the ZenFone 3 in their latest teaser video, and based on that info, the company will announce three smartphones at Computex. According to the newly leaked report, the company might introduce the ZenFone 3, ZenFone 3 Deluxe and ZenFone 3 Max at Computex, and one of those devices popped up on AnTuTu. If you take a look at the image down below, you’ll get to see AnTuTu’s listing of the Asus Z016D. This is quite probably a codename for one of the ZenFone 3 devices which will be announced soon, quite possibly the regular ZenFone 3 smartphone. Anyhow, according to the listing, the device will sport a fullHD (1920 x 1080) display, 4GB of RAM and 32GB of internal storage. Qualcomm’s Snapdragon 820 64-bit quad-core SoC will fuel this smartphone along with the Adreno 530 GPU. The 23-megapixel snapper will be placed on the back of this device, and an 8-megapixel shooter will be placed up front. Android 6.0.1 Marshmallow will ship out of the box here, and you’ll be able to find Asus’ ZenUI on top of Google’s operating system

The source also mentions that the device scored 135,000 points on AnTuTu, which means that it is at the very top of the food chain on AnTuTu, right next to the Le Max 2, Xiaomi Mi 5, Galaxy S7 and HTC 10. The ZenFone 3 launch is right around the corner, so stay tuned, we’ll report back soon. 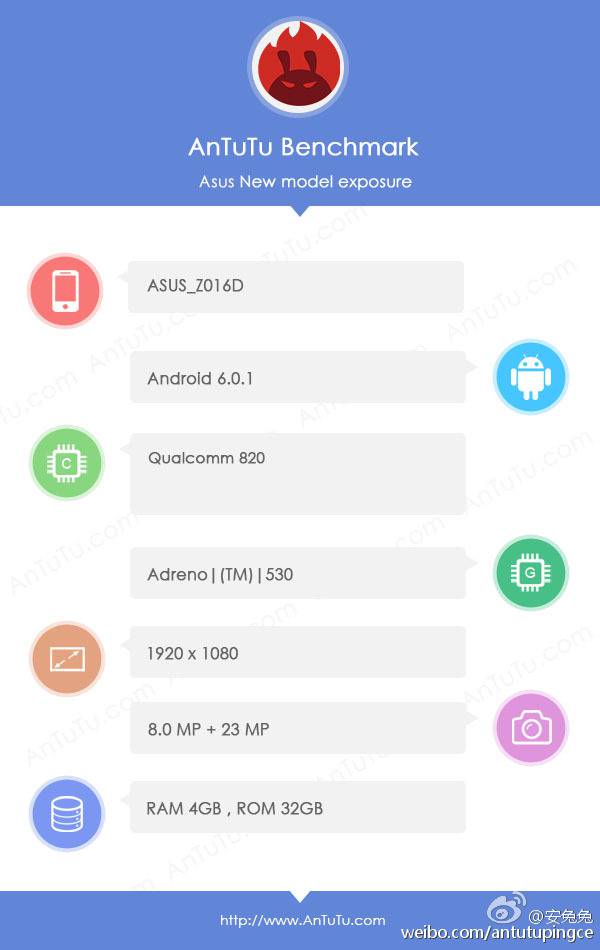