According to a recent report published by Gartner, Samsung Electronics has retained its crown as the largest smartphone vendor in the world ahead of rivals such as Apple and Huawei. The South Korean company managed to ship as many as 81.18 Million smartphones globally during the first quarter of this year, carving out a market share of 23.2%, which is down from 24.1% during the same period last year. The decline in market share is on account of the company’s largely flat sales, which were up slightly from 81.12 Million during the corresponding quarter last year. The overall smartphone market grew at 3.9% YoY, largely due to the growth in emerging markets, which is being fueled by the transition to 4G LTE from legacy 2G GSM and 3G HSPA / UMTS technologies.

Another takeaway from the data revealed by Gartner is the continuing growth of Android at the expense of every other mobile operating system on the planet. Android improved its hold on the global smartphone market during the last quarter by increasing its market share to a whopping 84.1% from an already-impressive 78.8% during Q1, 2015, even as the ‘third-largest’ mobile operating platform, Windows Mobile, lost a large chunk of its market share and now has less than 1% share of the global smartphone pie at just 0.7%. Meanwhile, Apple, too, suffered a major setback, as its iPhone sales registered a double-digit YoY decline for the first time in the company’s history, selling just 51.62 Million units during the first three months of this year as opposed to 60.17 Million units during the corresponding period last year.

Samsung launched its Galaxy S7 and S7 Edge handsets earlier than it ever did before with any of the previous iterations of its Galaxy S-series devices in years gone by. The early launch allowed it to get some of the initial sales show up in the Q1 data, and with the Galaxy S7 devices having been accepted pretty well by the paying public, Samsung has now been able to translate the early sales into fairly healthy Q1 numbers that the company’s investors shouldn’t be too concerned about. Where the company is still struggling, however, is the lucrative mid-range segment, where top Chinese and Taiwanese brands like Huawei, Oppo, Xiaomi and Asus are ruling the roost; especially in critical markets like China and India. 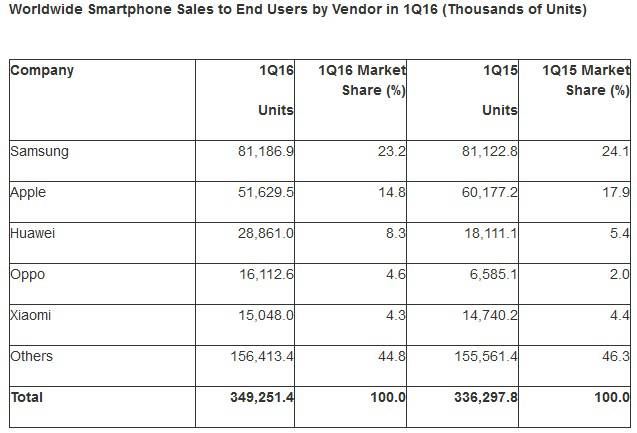