While Samsung has its share of critics who question the rationale behind launching an astounding number of smartphones every year, the fact still remains that the company’s strategy, for better or worse, has helped it remain the largest smartphone vendor in the world for the past few years. Whether Samsung’s strategy of flooding the market with multiple devices at every single price point actually helps or hinders customer loyalty is a question that’s often debated passionately on internet forums, chatrooms and social media, but the company isn’t likely to change its successful strategy anytime soon by the looks of it. Recent reports have indicated that the South Korean company is actually prepping the launch of yet another smartphone line – the Galaxy C-series – that will apparently be exclusive to China; at least for the time being.

One of the devices from the upcoming all-new lineup has now been certified by the Bluetooth SIG, suggesting an imminent launch. The device in question is the SM-C5000, which is expected to be marketed under the Galaxy C5 moniker. While the latest listing doesn’t really reveal a whole lot about the upcoming smartphone apart from its model number and a few other technical details, earlier leaks have revealed quite a bit about the upcoming device, which will likely be an upper mid-ranger that will come with some decent hardware. However, with the Chinese market saturated with low-cost, high-spec Android phones, the pricing of the upcoming Galaxy C-series devices will likely decide their fate in one of the world’s largest smartphone markets.

Taking a quick glance at what all we already know about the upcoming device, the Galaxy C5 (SM-C5000) is expected to feature a 5.2-inch 1080p display and will have the Qualcomm Snapdragon 617 SoC running under the hood. The device is also believed to have 4 GB of RAM and run Android 6.0.1 Marshmallow. Earlier leaked images of the device have also revealed that it will sport a metal body, so that is certainly a welcome change from Samsung whose mid-range smartphones have often been accused in the past of having a less than quality build. Either way, with nothing officially announced by Samsung as yet, there’s no word on when it might launch in China. What’s also unclear is if these devices will ever be released in other regions around the world. 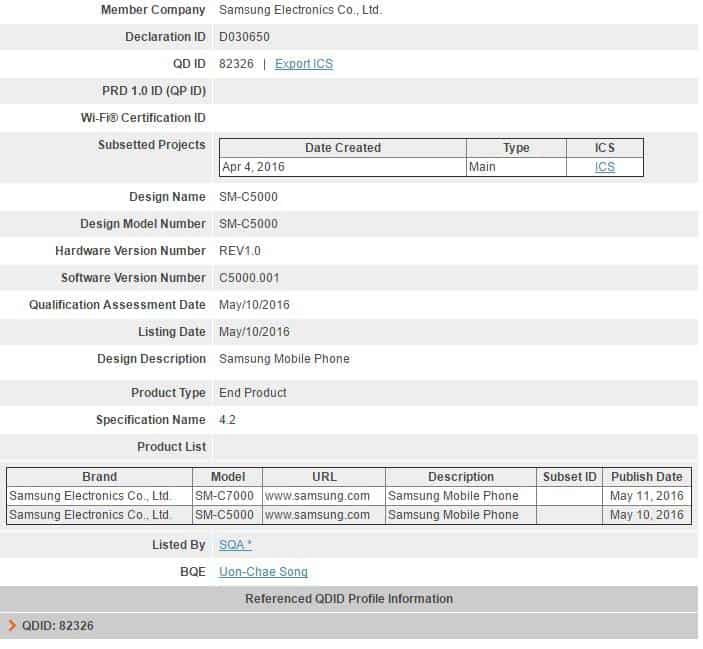