The highly anticipated ASUS ZenFone 3 series is expected to debut sometime between May 31st and June 4th at Computex 2016. The ZenFone 3 series should consist of three models previously teased by the Taiwanese manufacturer, namely the ZenFone 3, ZenFone 3 Deluxe, and the ZenFone 3 Max. But interestingly enough, a new, mysterious ASUS device was recently uncovered in PrimateLabs’ backyard, leading to various speculations as to what type of device it might be. So far, the rumor that seems to have caught on the most suggests that the new ASUS contender could be a tablet which will debut along the ZenFone 3 lineup.

The new ASUS device is identified by model number “asus P027” and runs Android 6.0 Marshmallow. According to the Geekbench database where the “P027” made its recent appearance, the device is not powered by a Qualcomm SoC unlike the majority of upcoming ZenFone smartphones (or at least the ASUS Z016D previously spotted in AnTuTu), and instead it uses a MediaTek MT8176 6-core processor clocked at frequencies of up to 1.70 GHz. Along with the CPU operates 2 GB of RAM, but sadly no other details have been revealed. Still, the P027 is capable of scoring 1753 points in Geekbench integer performance single-core tests, and 5605 points in multi-core tests. The same hardware scores 1455 and 3331 points in single-core and multi-core floating point performance tests respectively, and also yields 1576 / 1590 points in memory tests.

Although it may look like ASUS is working on a new MediaTek powered product, there’s no clear hint as to what market segment will accommodate the “P027”. Rumors have it that it could be a new tablet, presumably the so-called ZenPad A or a new slate as part of the ZenFone 3 family of products. On the other hand, there’s no information regarding the product’s dimensions and display size, so it may very well be a smartphone; a new entry or a sequel to a previous model. Needless to say, the story could unfold either way, but assuming that the P027 will continue to rear its head in the coming days and weeks then there is a high probability for the product to be introduced at the same time as the ASUS ZenFone 3 series. 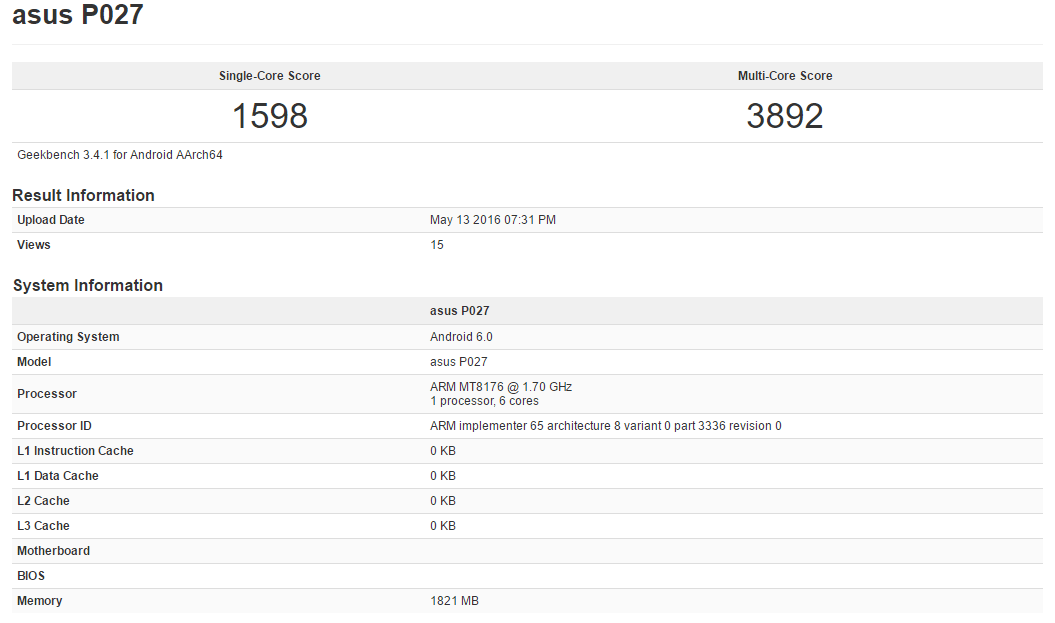