When it comes to Sony’s Mobile division, they have not had the easiest of rides over the last couple of years. While their Xperia Z range proved popular among users, as time has gone on, the Xperia Z line had become somewhat limited in its availability on a worldwide scale and most notable, in the U.S. This then led to many wondering what the future would hold for the Xperia Z range, although answers to that particular question seemed to come through loud and clear at the start of this year. Around the same time however, Sony began pushing forward with its ‘Xperia X’ range which was introduced at MWC this year and includes the Sony Xperia X, Xperia XA and Xperia X Performance. A line which is said to be not a direct replacement for the Z range, but a different projection of their mobile ambitions going forward. Although, to all purposes, it does seem to be what is now the flagship range for Sony. Now, reports are starting to come through from China which look to confirm that Sony is going to solely focus on the Xperia X range up until at least 2018.

While this might not come as a massive surprise to some, as it understood that the Xperia X range marks the best of what Sony Mobile now has to offer, the focus in the reports is the overall intention of Sony to create a unified brand under the ‘X’ moniker. What this also means (according to the information), is that Sony is looking to fully drop the likes of the Xperia C and Xperia M ranges as well. As a result, with the C and M ranges joining the Z range, the information suggests Sony will entirely place its mobile, IoT and Cloud emphasis, branding and products under the one X banner.

Again, according to the details, this unification of the X brand is designed to be one of the main advertising aspects Sony hopes to use going forward with the reports detailing the ‘X chapter’ as “Chapter 3” in the Sony Xperia history. For reference, Chapter 2 was said to be the ‘Best of Sony’ and is summed up by the offerings of 2013 through to 2015, including the Sony Xperia Z range while Chapter 1 spanned 2010 through to 2012. You can see an example of the Sony evolution in the image below, which also highlights the X emphasis going forward. Whether this means there will be less devices coming through from Sony remains to be seen, but if the information is correct then what it does mean is that all the devices which do come from Sony (at least until 2018) will be Xperia X branded handsets, irrespective of price or status. 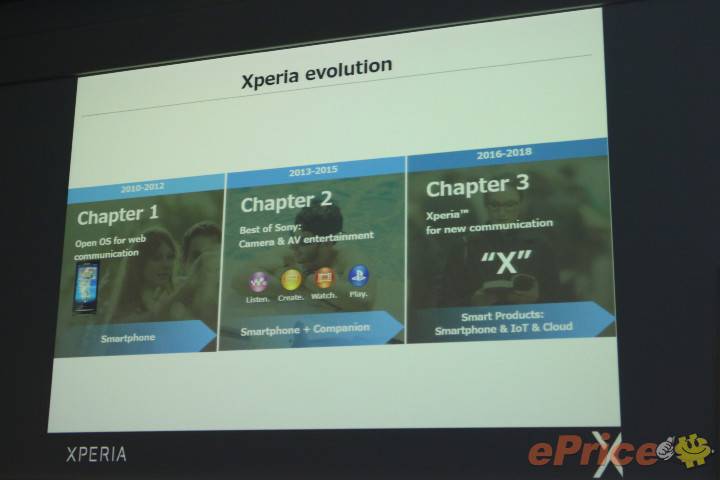