Even though HTC’s smartphone business hasn’t been profitable for several quarters, the company believes it has enough ammunition in its armory to take on global heavyweights like Samsung and Apple in the consumer technology industry. While the HTC 10 is the company’s latest flagship that is fighting an uphill battle against the likes of the Galaxy S7 and the LG G5, HTC’s latest big bet seems to be its Vive virtual reality headset that it developed in collaboration with Valve Corp. However, the Taiwanese tech company is far from a one trick pony, and while smartphones continue to remain its bread and butter, the company is now starting to diversify into other areas of consumer technology, including smart wearables.

While reports about an HTC smartwatch have been doing the rounds for a while, the device has faced delays along the way, much like the company’s Vive VR headgear. According to prior reports doing the rounds of the internet, the device was expected to be unveiled in early June, but apparently, HTC has now decided to postpone the official unveiling until this winter. This was conveyed through a tweet by tech journalist and tipster extraordinaire, Mr. Evan Blass, aka @evleaks on Twitter. As a quick recap of the timeline for HTC’s smartwatch, the device has been rumored to be an on-again, off-again project at the company, ever since it was said to have been cancelled in September, 2014.

However, early next year, the project was said to be back on, and while the company is believed to be working on it since then, it has very little to show for its efforts after all this time. While the device was earlier expected to be released early next month, the latest piece of news now means that we’ll all have to wait at least until the fall to finally get to see the gadget in the flesh. While not much is known about it, the device is expected to run on Android Wear, and have a circular display panel with a 360 x 360 pixel resolution. Some reports from last year had also indicated that the device was known internally within HTC by its code name – Halfbeak. However, with the passage of time, things could have changed drastically, so there’s no telling what HTC will come up with when it finally makes the device official at some stage in the future. 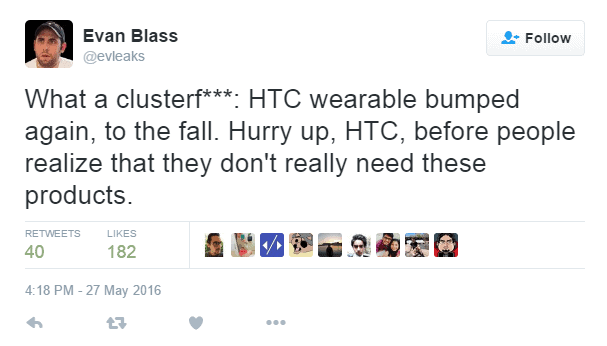