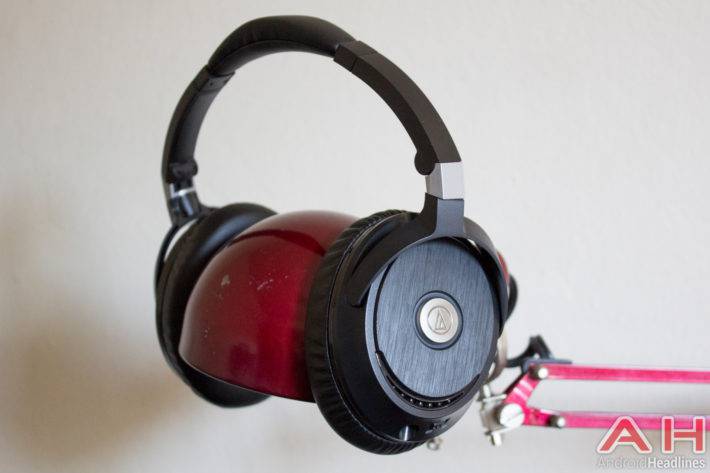 In the 1990’s and early 2000’s many people were enamored with earbuds, a significantly smaller type of headphone that fit more discreetly in your ears than the old over the ear style did. Those big old clunky cans became something seemingly no one wanted to wear anymore, and sound quality as a whole suffered because of it. The last decade has reversed that trend though, namely by offering over the ear headphones that aren't as clunky as the old ones but offer significantly higher audio quality than those little earbuds can. Audio-Technica is one such brand that specializes in over the ear headphones, and while they have plenty of different product lines that even include ear buds, their most premium products will be found in these larger varieties. The ANC70 noise canceling headphones were reviewing today promise to offer high-quality audio without all that annoying background noise that you might be used to with other types of over the ear headphones. 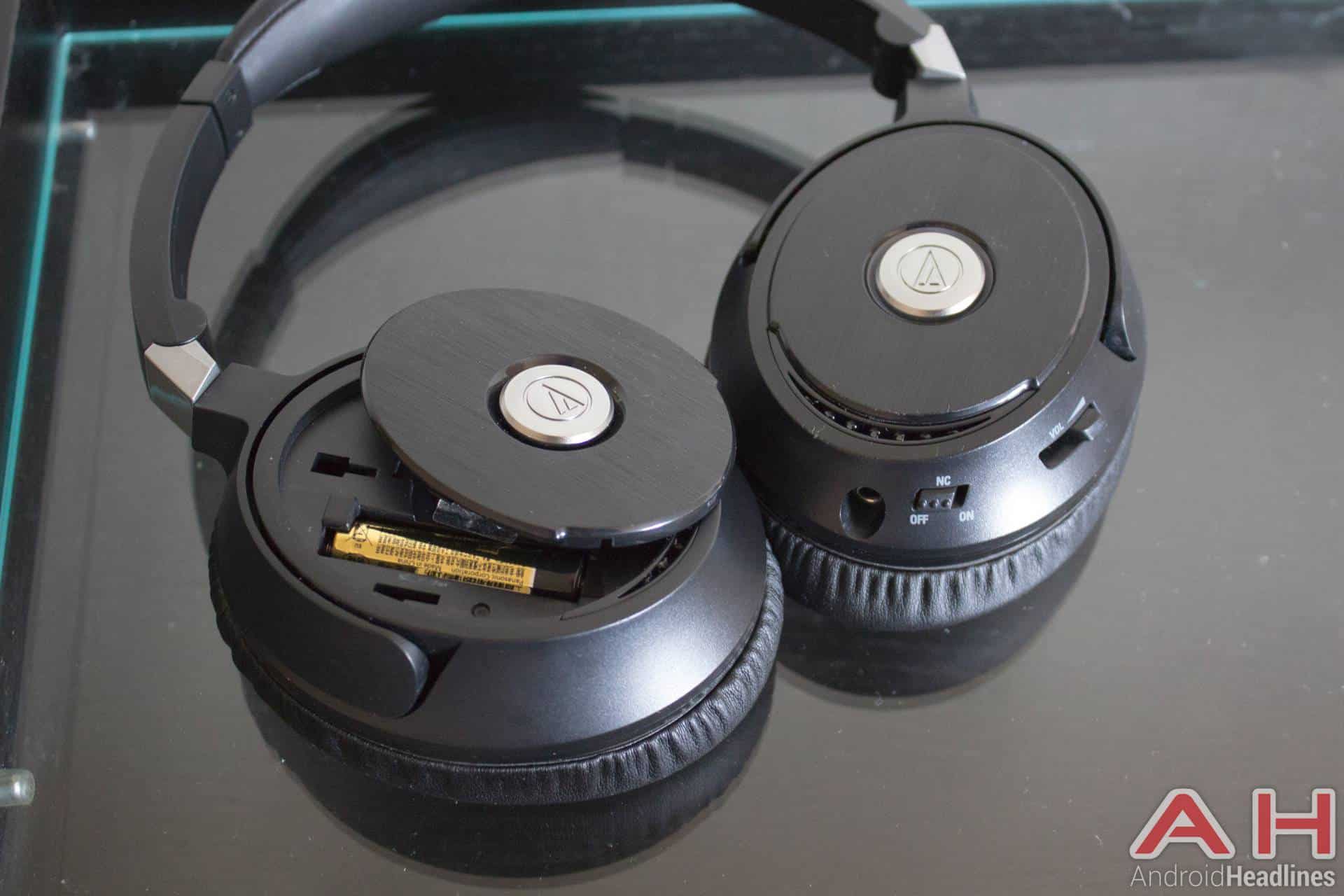 For $149 you might have some expectation of build quality or materials used here, and it's entirely possible that you'll be a bit let down depending on what sort of headphones you're used to. At this price range for a more premium over the ear model, something has to give, and it appears that general build quality was chosen to bear the brunt of the cost savings on the ANC70’s. Overall they feel a bit cheap, with a lighter plastic build that feels a bit too light, although for over the ear headphones that's not always a negative thing. While they do feel cheaper the lighter build will help them stay more comfortable over a long period of time, as other over the ear headphones made of metal or thicker plastic will likely get annoying resting on your head for hours. You'll also find that they're quite flexible and can withstand being twisted and bent pretty far without warping. The earpieces themselves also fold completely into the top of the headrest, as well as having the ability to swivel about 100-degrees inward. This all combines to help make these headphones more durable and portable, despite the cheaper feeling plastic build. All the hinges are metal too, so while the rest of the unit could be prone to breaking, the hinges and innards feel a bit more solid. 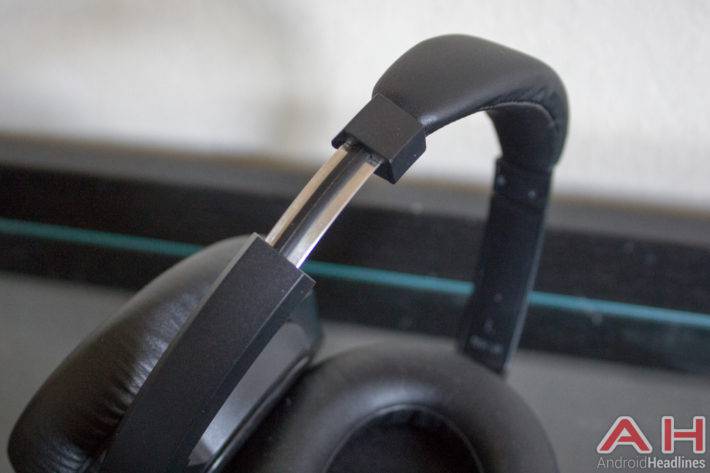 As is the case with the build, the 3.5mm audio cable packed inside the box feels cheap too. This thankfully doesn't seem to hinder audio quality in any way, however, it definitely feels like it's the thinnest material they could have possibly used, and it's a little short too. Being a wired headset it's important to have a thicker, longer cable for durability and comfort, and this particular cable fails in both of those departments. You'd be better off using an existing one or buying another one, although it will certainly do the job if you don't have another. The left earpiece is the main one, holding the 3.5mm headset jack and the rest of the components as well. Here you'll find the controls, which include a noise cancellation toggle switch and a volume slider. A blue ring around the Audio-Technica logo here on the left side will light up when the noise cancellation is enabled, otherwise, the headphones will have no lights on them at all. All this is powered by a single AAA battery held inside the battery compartment, which is a simple slide up of the plastic piece with the Audio-Technica logo on it on the right earpiece. 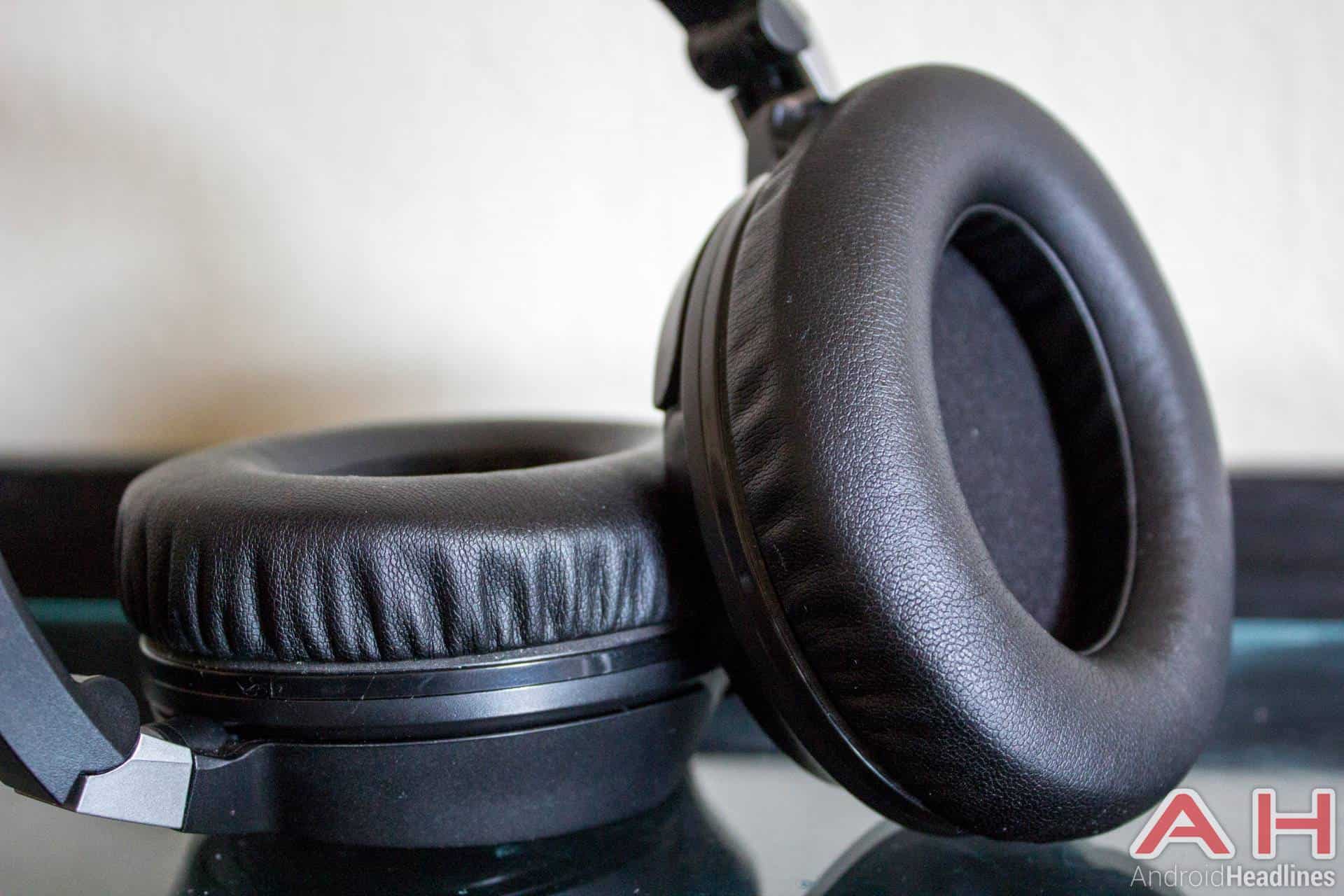 As discussed before the weight of the Audio-Technica ANC70 headphones may make it feel a bit cheaper, but it evens out by making them more comfortable in the long term. In addition to this, the size and overall shape of the headphones fit a large range of head sizes and shapes, and even the ear covers are well suited for various ear sizes. These ear covers are well padded and fit snuggly on the head, but not so snuggly that they are uncomfortable, even after a 6-hour flight. I found that the did a great job themselves of blocking out noise from the outside, although on something as loud as a plane you're going to need that noise cancellation setting to work the best. There's even a luxurious amount of padding on the piece that sits on top of your head, and coupled with the light weight of the headphones makes this one one of the most comfortable over the ear headphones I've ever used.

Operationally these are about as basic as they come. Since there's no wireless component to the headphones, there is no pairing to fuss with, and no configuration needed to get them working at all. Aside from the volume control slider that's independent from the audio volume on your phone, you've only got the noise cancellation switch to use as well as the button which carries the AAudio-Technica logo on the left headset. Oddly enough this button appears to do nothing, as pressing it would make one assume it would pause and play the music currently playing, but unfortunately it doesn't. About the only other thing you'll have to worry about if you use the noise cancellation feature is that AAA battery inside the right earpiece for said feature. However after having used these headphones over a number of business trips now I've yet to see it wane in the slightest. 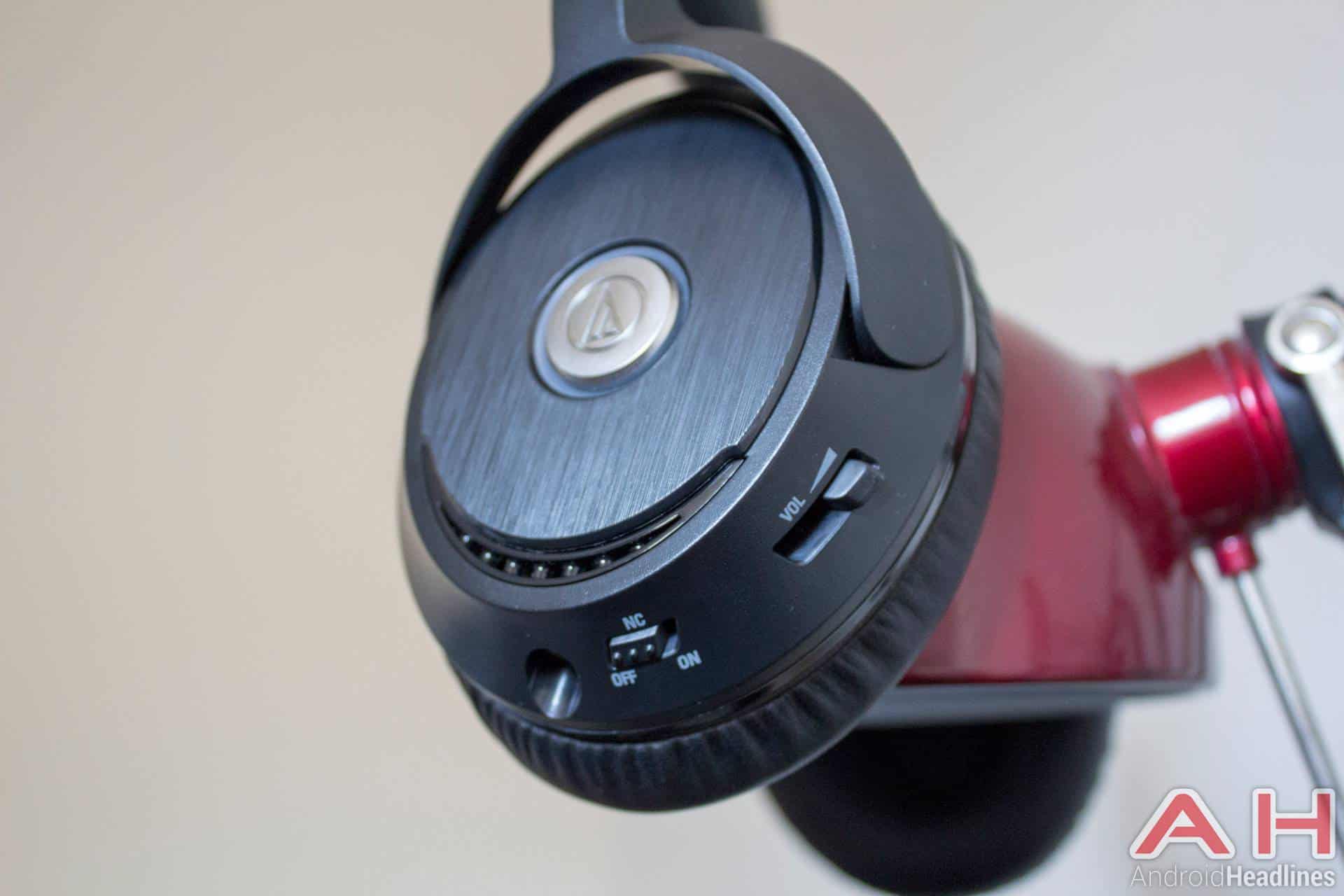 The most important part of a pair of headphones is of course the audio quality, without a doubt.  As is the case with the rest of the set these won't be delivering any fancy features aside from noise cancellation. There's no faux-3D audio, no virtual surround, no fancy extra equalizers or high resolution audio support, but that's OK because it makes up for the lack of extras in sheer quality of the audio alone. It simply cannot be stated just how much is added to music when there's no additional background noise to distract you from it. The noise cancellation on these headphones sounds second to none, and I even almost forgot I was on a flight when using these. Toggling that noise cancellation switch to turn it off reveals just how much extra noise would have prevented me from hearing the full range of audio presented here, and that's something that makes these completely worth the price alone.

When turning on the noise cancellation you will want to have these already sitting on your ears, as you'll likely hear a crackle or pop of the speakers if they're off your head. This happens when the noise cancellation cannot create a vacuum to suppress extra sound in, and does not happen when the earphones are placed on the head first. The cancellation effect happens after a brief pause so that the unit can sample any noise first, and immediately you'll be warped into a new world of audio fidelity. The range and quality of audio here is superb too, and the quality of the audio isn't just reliant on the quality of noise suppression either. Deep bass and clear highs are delivered, requiring no adjustment on my part in software to make them sound excellent. I enjoyed many types of music on these and all of them sound great, although I found that songs with strong bass lines were particularly enjoyable thanks to the large drivers in each ear. These keep the bass from bleeding into the rest of the spectrum, which might otherwise mask the more subtle tones in your music. 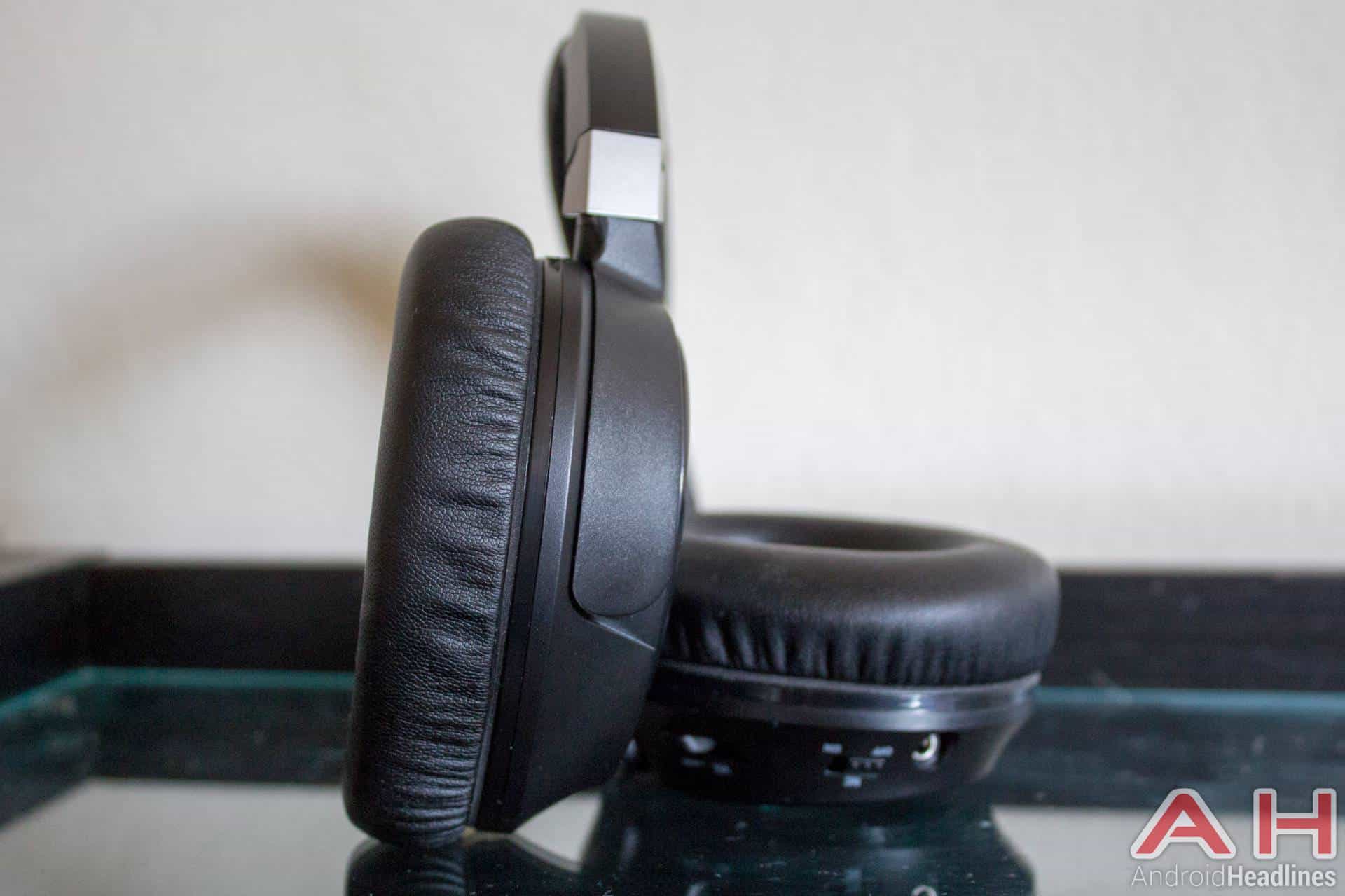 Aside from a fairly cheap feeling build and lack of any kind of wireless support, there are very few negative qualities to the Audio-Technica ANC70’s.  These are my new favorite over the ear headphones and it's not just the quality that does it, it's that incredible noise cancellation too. Being on something as loud as an airplane, yet being able to hear my music as clearly as if I were in a quiet room at night, is something truly stunning to enjoy. Sure there's not really any extra features aside from this, and it would be nice to have some music control right on the headphones or on the cable provided, but once again that incredible audio quality helps make up for missing features. Grab a pair for yourself at the Amazon link below!

Advertisement
Buy The Audio-Technica ANC70 Headphones
Advertisement
Trusted By Millions
Independent, Expert Android News You Can Trust, Since 2010
Publishing More Android Than Anyone Else
13
Today
13
This Week
14
This Month
4779
This Year
106256
All Time
Advertisement