Most of you know that Xiaomi and Huawei are China’s largest smartphone manufacturing companies at the moment. Xiaomi was the number one smartphone manufacturer in China at the end of last year (as far as market share goes), while Huawei was a close second. On a global scale, Xiaomi still can’t measure up to Huawei due to the fact the availability of their handsets is quite region-specific. Anyhow, a new report surfaced in China containing Chinese market share for April, read on.

This info was gathered by a local market research firm, and Xiaomi’s CEO has already shared the info through his official Weibo (Chinese social network) page. According to this research, Xiaomi is currently the number one smartphone manufacturer in China, the company currently holds 26% of the smartphone market. Huawei’s Honor is placed second with 15.7% market share, but if we add Huawei’s (main brand) 8% to that, we get 23.7% market share, which is still not enough to beat Xiaomi. LeEco (formerly Letv) is third-placed according to this research, the company stands at 8.2% market share in China, and is followed by the likes of Apple (8.2%) and Huawei (8.0%). Meizu is currently at 7%, and holds the 6th place in the market, while you’ll notice that Meizu is followed by 360 (4.5%) and Samsung (3.2%).

As you can see, Xiaomi is still number one in China, at least based on this research. Huawei is close second when (Huawei and Honor combined), and LeEco managed to climb really fast. It will certainly going to be interesting to see what happens by the end of the year, every single one of these companies will release new smartphones in the coming months, and LeEco has recently introduced three new devices (Le 2, Le 2 Pro and Le 2 Max) which will affect their results in the coming months. Xiaomi is definitely feeling the heat at this point, and who knows if they’ll be able to keep that number one spot for much longer. Meizu will quite probably grow more before the end of the year, and Apple’s iPhone SE is selling really well, so that might affect Apple’s percentage as well. 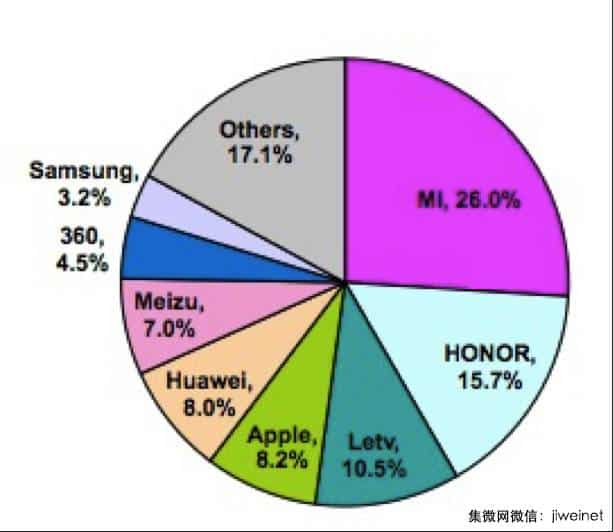