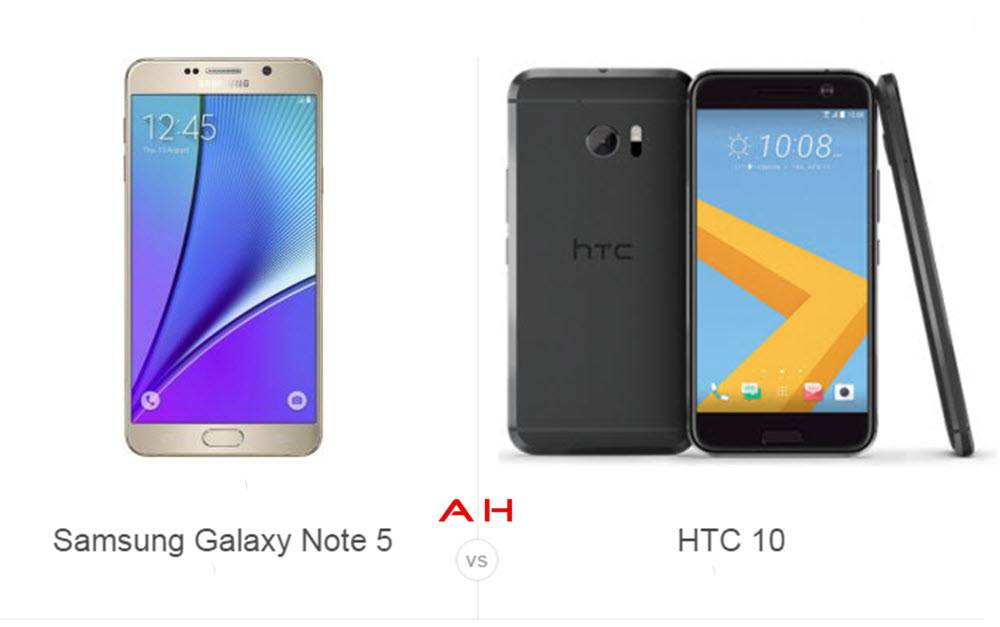 Do we have a good one for you today – the infamous Samsung Galaxy Note 5 goes up against the new HTC 10.  The newest device from HTC will go up against the last year’s Galaxy Note 5 – can the premier phablet still beat out the newest kid on the block?  The Note 5 is made from a metal chassis and frame, surrounding Gorilla Glass 4 on the front and the back, while the HTC 10 is an all-metal wonder with a new chiseled look.  Both devices look and feel premium in every sense of the word. Let’s take a look at what these devices have in common before we take a closer look at each device.

The Galaxy Note 5 and HTC 10 do have a few things in common – physically, they are close in height and width, although the Note 5 weighs in at 10 grams heavier.  They both have a Quad HD (QHD) display resolution of 2560 x 1440 pixels, but they use different technologies and are different in size.  Both devices use 4GB of DDR4 RAM, and both have a 32GB memory variant.  Both of the front-facing cameras (FFC) are 5MP in size, but the HTC has better specs.  They both have a bottom-mounted speaker, but the HTC adds a second in its earpiece.  Speaking of sound – both devices incorporate Hi-Res audio when listening through the earphones.  Both include a fingerprint sensor as well as the usual suspects – WiFi, Bluetooth v4.2, GPS, NFC, a microUSB port (v2.0 on the Note 5 and Type-C on the HTC 10) for charging and data transfer.  Both devices use a 3000mAh non-removable battery, and both have fast battery charging, although the Note 5 offers quick wireless charging as well. 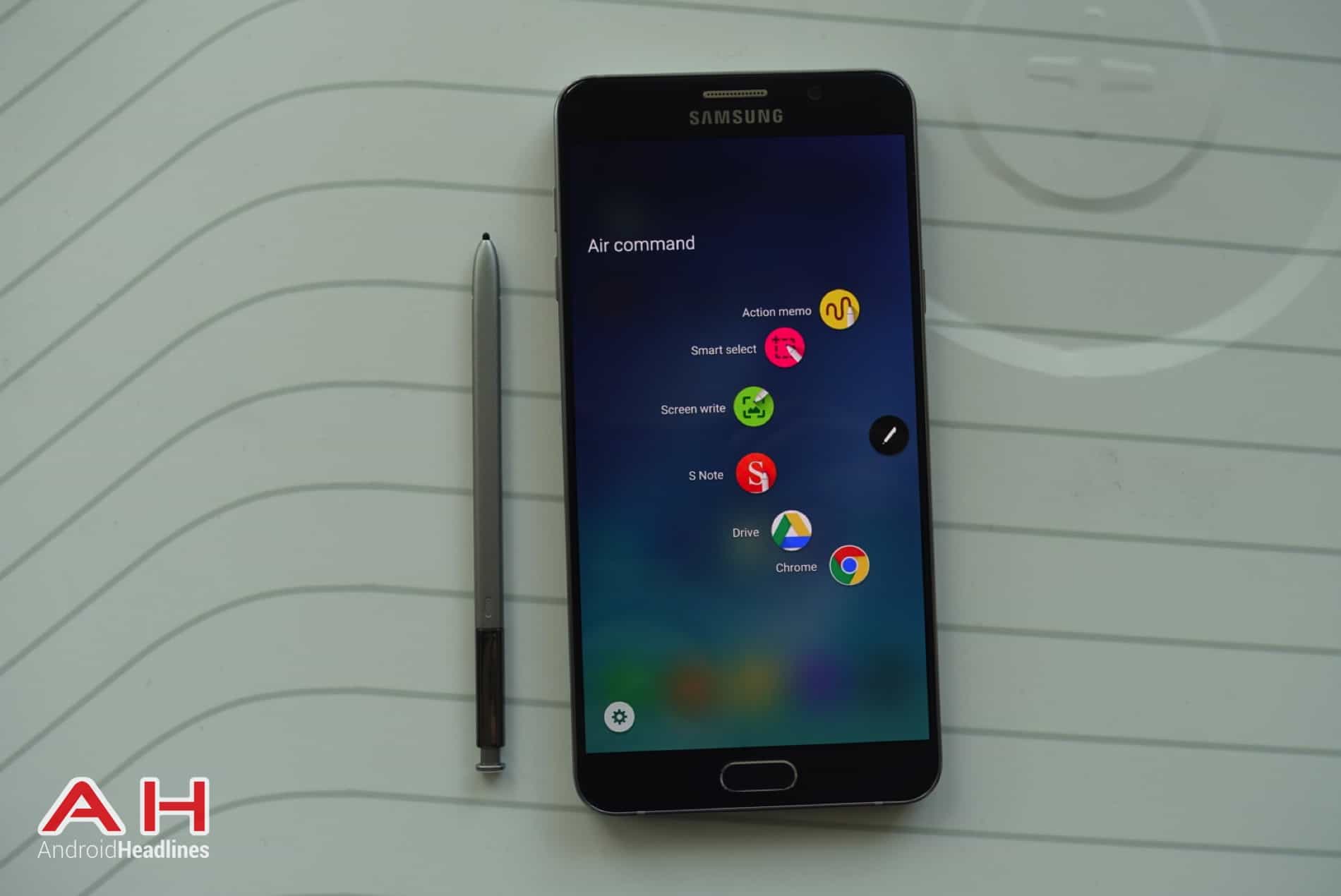 Like their Galaxy S6 series, Samsung revamped their Galaxy Note 5 by tossing out the plastic backing and metal-like trim and replacing it with glass and sculpted metal.  Unfortunately, this redesign included the loss of memory expansion and the removable battery.  This upset many power Note 5 users, as they ended up with a more premium looking device, but lost several of its coveted features.

The Galaxy Note 5 continues to sport the same size 5.7-inch display as the past two years, although Samsung continues to improve its display every year.  It uses Samsung’s Super AMOLED QHD display with a resolution of 2560 x 1440 pixels and 518 pixels-per-inch (PPI.)  The Note 5 uses Samsung’s 64-bit Exynos 7420 octa-core processor with four cores clocked at 1.5GHz and the other four cores clocked at 2.1GHz with the newest 14nm technology.  The Note 5 packs 4GB of DDR4 RAM as does the HTC 10, and when it comes to internal storage, the Note 5 has a 32GB or 64GB option of much faster UFS 2.0 Flash memory, but no room for expansion.

The primary camera on the Galaxy Note 5 has a 16MP Samsung ISOCELL sensor with fast startup, fast focus, large aperture at f/1.9 for better low-light photos, Live HDR and great software.  The Note 5 also has a 5MP front-facing camera (FFC) with a f/1.9 aperture and wide-angle and Live HDR for selfies and video chats.  The Note 5 has a non-removable 3000mAh battery but offers a quick charge feature as well as quick wireless charging capabilities.

The Galaxy Note 5 has a fingerprint sensor that is both Samsung Pay and PayPal certified that can be used to authorize mobile payments. It offers a heart rate monitor and oxygen saturation sensor and built-in wireless quick charge.  It comes with a much improved and more sensitive S-Pen with added features giving it, even more, functionality.  The Note 5 has more flexibility with longer documents, and you can send live broadcasts of your videos.  It was running Android 5.1.1 Lollipop however, it has received its Marshmallow update.  It measures 153.2 x 76.1 x 7.6mm and weighs in at 171 grams.  It comes in Black Sapphire, White Pearl, or Gold Platinum and it will cost you about $700 outright for a 32GB model and $790 for a 64GB model.

HTC – what can you say about this company that has not already been said?  HTC burst onto the Android scene many years ago but failed to keep up with its innovative ways and before they knew it, Samsung took over the lion’s share.  The HTC 10 is the flagship device they should have been building all along – the body is still all-metal, HTC finally switched to a QHD display, they used the best processor currently on the market, put in 4GB of DDR4 RAM and it offers expandable memory.  HTC finally has a great camera area, newly configured BoomSound Hi-Fi and Hi-Res Audio.  HTC is hoping they can regain some of their former customers and gain new ones.

HTC finally succumbed to criticism moved up to a QHD display.  The HTC 10 sports a 5.2-inch Super LCD5 QHD display with a resolution of 2560 x 1440 pixels and 565 PPI.  HTC picked the best processor currently on the market – the Qualcomm 64-bit Snapdragon 820 quad-core with dual cores clocked at 1.6 GHz and dual cores clocked at 2.15 GHz. Qualcomm coupled it with their Adreno 530 GPU, which will handle the most demanding graphics/games.  The HTC 10 packs 4GB of DDR4 RAM and 32GB of internal memory that is expandable to 2TB via a microSD card.

The HTC 10 finally has a terrific camera.  The UltraPixels are back, but instead of trying to pawn off only 4MP, HTC is now using a respectable 12MP sensor for their primary camera to capture more light and image.  They added laser autofocus, a dual-tone LED flash, a large aperture of f/1.8 and finally OIS.  HTC chose a 5MP FFC, but added the f/1.8 aperture, wide-angle lens, OIS, and even included a screen flash to ensure great selfies and video chatting even in low-light.  The HTC 10 uses a 3000 mAh non-removable battery and comes with Qualcomm’s Quick Charge 3.0 – which will give you up to a 50-percent charge in only 30 minutes.

HTC made a few design changes in the HTC 10.  The popular BoomSound was renamed BoomSound Hi-Fi, and because HTC placed their fingerprint sensor down front, where the second speaker once resided, they put the woofer on the bottom end of the device.  The high-end sounds now originate from the earpiece.  The HTC 10 measures 145.9 x 71.9 x 9mm and weighs in at 161 grams.  It comes in Carbon Grey, Topaz Gold, and Glacier Silver and it will cost you about $650 for 32GB of memory.

As much as I like the Galaxy Note 5, I have to pick the HTC 10 as the winner of this comparison. The Note 5 is a terrific device and if you are attached to the S-Pen and like the functionality the Note series provides, then buy it and enjoy it – you will not be disappointed.

However, the HTC 10 embodies the 2016 flagship specifications – QHD display, Snapdragon 820/Adreno 530, 4GB of DDR4 RAM, expandable memory, great camera, quick charge battery, and a beautiful design. The HTC 10 just has a few extra specs that nudge it over the top to claim this victory.

True, the Note 5 has the heart rate monitor, oxygen saturation sensor, Samsung Pay, a larger Super AMOLED display, quick wireless charging, and the S-Pen – all great features. But the HTC has a much better processor and GPU, a much better FFC area, and the ability to expand its memory all for a lower price. Either device should make its owner happy; it just depends on your needs.