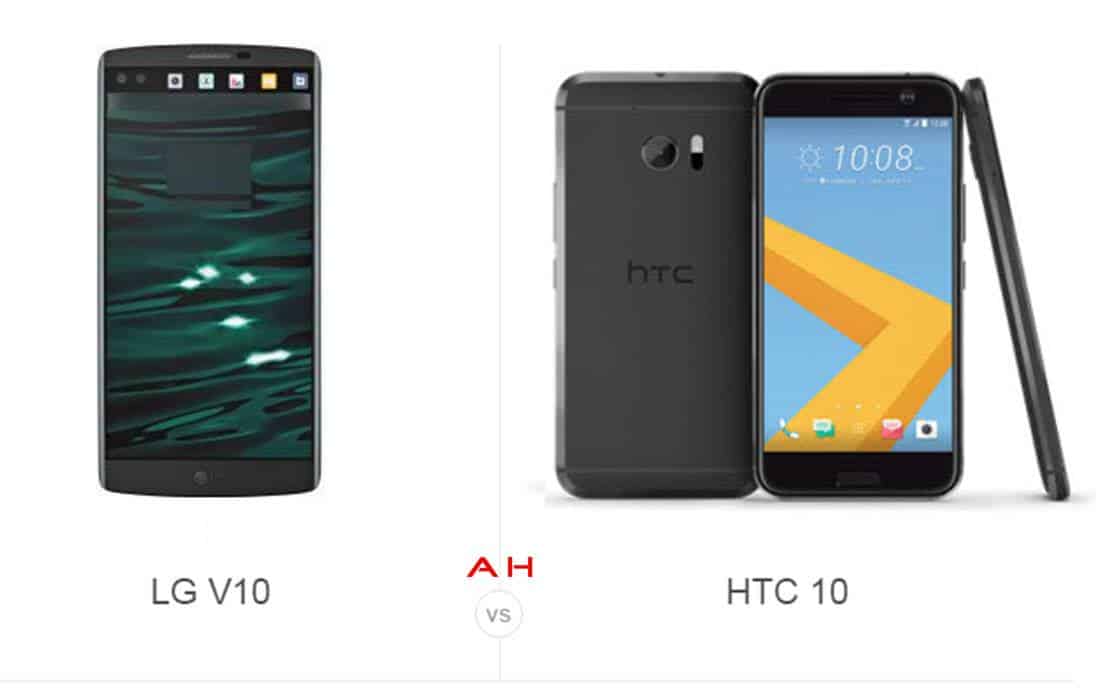 Do we have a good one for you today – the LG V10 takes on the new HTC 10.  Not many would argue that these two all metal smartphones are as beautiful to look at, as they are to hold – truly a premium design and build in every sense of the word.  We have two all-metal devices, yet they are completely different in their looks.  The LG V10 is a more ‘squared off’ design with a silicone backing to add some grip.  The HTC 10 has more rounded corners and a more ‘chiseled’ look to it. This is one of the nice things about Android devices – you get to pick and choose whatever design suits your tastes.  Let’s take a look to see just what these two devices have in common and then we will take a closer look at each individual device.

The LG V10 and HTC 10 do not have a lot in common – not even in size, as the V10 towers over the HTC 10 with its half-inch larger display and body, as well as outweighing the HTC 10, 192 grams to 161 grams.  They both use the LCD display technology and the QHD display resolution.  Both are using a 64-bit Snapdragon processor, but different models and different GPUs.  Both are packing 4GB of memory and both have expandable memory via a microSD card.  These smartphones have interesting camera areas, but both take excellent pictures.  Both have a fingerprint sensor for unlocking the device as well as making mobile payments. They have the usual suspects – WiFi, Bluetooth (v4.1 on the V10 and v4.2 on the HTC 10), GPS, NFC, MicroUSB port (Type-C on HTC 10), 3000mAh batteries (removable in the LG V10) and both offer a quick charge system.

The LG V10, introduced back in October, is sculpted from stainless steel with a silicone backing and includes some display and camera technology thrown in the mix – LG gave it two 5MP FFCs and a small, independent display sitting above the 5.7-inch main display, which can operate when the main display is off.  Let’s take a closer look at the LG V10 and see just how it stacks up against the new HTC 10.

The LG V10 sports two displays – there is a main IPS Quantum QHD display measuring 5.7-inches with a resolution of 2560 x 1440 pixels and 515 PPI and above the main display, near the top of the device, is a 1040 x 160-pixel display that is also 515 PPI.  The secondary display is functional even when the main display is off – to show notifications, the weather, the time/date, app shortcuts and more – hopefully saving battery life.  The LG V10 uses a 64-bit Qualcomm Snapdragon 808 hexacore processor with four cores running at 1.44GHz and two cores running at 1.8GHz.  The LG V10 packs 4GB of DDR3 RAM and 64GB of internal storage with room to expand an additional 2TB.

For its main camera, the LG V10 uses a 16MP sensor, adds laser autofocus, a large f/1.8 aperture, OIS and an LED flash.  Then, LG decided to take a page from HTC’s old playbook and use dual 5MP FFCs to add a wider field and more depth to the traditional selfie or video chat.  The LG V10 packs a 3000mAh removable battery and should last throughout an entire day.  Quick Charge 2.0 is available to give you up to 50-percent battery life with a 40-minute charge.

The LG V10 has a speaker on the bottom of the device and includes Hi-Fi circuitry for improved sound through the headphones (as does the HTC 10).   The V10 measures 159.6 x 79.3 x 8.6 mm and weighs in at 192 grams.  The available colors are Space Black, Luxe White, Modern Beige, Ocean Blue and Opal Blue.  It is available on Verizon, AT&T and T-Mobile, priced at approximately $670, and is now running Marshmallow.

The new HTC 10 has all of the desired specs in flagship smartphone – the body is still made of aluminum, but this time around, HTC made it a more angular to quiet the naysayers complaining the design was getting old.  It has a QHD display, the best processor currently on the market, a powerful GPU to satisfy the most avid gamer and 4GB of DDR4 RAM and expandable memory.  The HTC 10 finally has a great camera and a newly configured BoomSound Hi-Fi and Hi-Res Audio – but is it enough to sway new customers to try the HTC brand?  HTC is hoping they will sell millions, and so do their accountants.

We are happy to see that HTC finally ditched their FHD display and now the HTC 10 sports a 5.2-inch Super LCD5 QHD display with a resolution of 2560 x 1440 pixels and 565 PPI.  HTC chose the best processor currently available – the Qualcomm 64-bit Snapdragon 820 quad-core with dual cores clocked at 1.6 GHz and dual cores clocked at 2.15 GHz. Qualcomm paired the 820 to an Adreno 530 GPU to handle the most demanding graphics you can throw at it.  The HTC 10 packs a full 4GB of DDR4 RAM and 32GB of internal memory that is expandable to 2TB via a microSD card.

HTC fumbled around with odd camera setups for the past three years, but it looks like they finally got it right on the HTC 10.  Yes, it still uses UltraPixels, but instead of trying to pawn off only 4MP, this time around HTC is using a 12MP sensor for their primary camera to capture more light and image.  They added laser autofocus, a dual-tone LED flash, a large aperture of f/1.8 and OIS.  They picked a relatively ‘safe’ 5MP FFC, but then added the f/1.8 aperture, wide-angle lens, and even included a screen flash and OIS to ensure great selfies and video chatting even in low-light.  The HTC packs a 3000 mAh non-removable battery with Qualcomm’s Quick Charge 3.0, which will give you up to a 50-percent charge in only 30 minutes.

The HTC 10 made a few changes on this latest rendition – the first was with their infamous BoomSound – they placed their fingerprint sensor down front where the second speaker once resided, so they had to do some rearranging.  HTC renamed it BoomSound Hi-Fi, but it still features the separate speakers, however, the woofer is placed on the bottom end of the device, and the high-end sounds now originate from the earpiece.  The HTC 10 measures 145.9 x 71.9 x 9mm and weighs in at 161 grams.  It comes in Carbon Grey, Topaz Gold, and Glacier Silver and it will cost you about $650 for 32GB of memory.

This turned out to be an easy decision – the HTC 10 is the winner of this comparison.  The HTC 10 simply has the better technology, and it should, as it is the newer device.  This is not to say that the LG V10 is any kind of a slouch – it is a well-designed smartphone that will satisfy many buyers – especially if they like the 5.7-inch display.  The LG V10 and HTC 10 are selling for about the same price, in fact, the LG V10 lists for more than the newer HTC 10.  The carriers are offering deals on the HTC 10 that can save you up to $100, which means the HTC 10 is not only more technologically advanced but is also cheaper.

The HTC 10 has a much better processor and GPU, not to mention the faster DDR4 RAM that the Snapdragon 808 in the LG V10 cannot handle.  The camera topped the charts at DxOMark and the FFC even includes screen flash, it offers BoomSound Hi-Fi, faster Quick Charge 3.0, the newer reversible Type-C connector, and a smaller size, which is appreciated by many.

The LG V10 does offer the secondary display, an IR Blaster, FM radio, and removable battery – nice features, but not enough to win this battle of specifications…especially when it costs more.