Do we have a good one for you today – the LG G5 goes up against the new Meizu Pro 6.  Both of these devices are made of metal with rounded edges, although the LG G5 is coated with a colored paint that hides the antenna lines and it gives the device a different feel in your hand.  Both are beautiful flagship devices with the premium look and feel.  The new LG G5 represents a complete makeover from previous models and has all of the bells and whistles. The Meizu Pro 6 has many features and a very reasonable price tag – does the price of the Pro 6 make it too hard to pass up or do we need those added features on the G5.  Let’s look at some of the similarities between these two devices before we look at each one individually.

The LG G5 and Meizu Pro 6 do have a few things in common – for starters, the display size is almost identical in size  (5.3-inches on the G5 and 5.2-inches on the Pro 6), although they sport different technologies and different resolutions.  Because the displays are so close in size, so are the physical dimensions and there is only a 1 gram difference in weight.  Both devices pack 4GB of RAM, although the G5 uses the much faster DDR4 RAM, and both offer 32GB of internal memory – the LG G5 offers memory expansion via a microSD card and the Pro 6 only has a 64GB variation and no available expansion.  They both have the usual suspects – WiFi, Bluetooth (v4.2 of the G5 and v4.1 on the Pro 6), GPS, NFC, and the newer reversible Type-C microUSB port for charging and data transfer.  Both have a fingerprint sensor and both offer a fast charge option.

LG is not afraid to try something new as is evident in the design of the new LG G5.  They took a popular device and did a total makeover to arrive at the LG G5.  Then LG took a huge leap by using ‘slide-in’ modules.  The user must push a button on the lower side of the device to slide out the bottom ‘chin’ along with its battery. That slot can then serve as a receptacle to slide in modules that add a new battery or more functionality to your LG G5.  This ability is an exciting concept, but just how practical are they? Will developers collaborate with LG to produce the necessary modules to attract buyers at a reasonable price?  Will those modules be usable in future devices (LG G6)?  LG deserves much credit in its design – they went from a plastic to a metal body, but they were able to keep those features that users really want, like memory expansion and a removable battery.  Let’s take a closer look at the new LG G5 and see just how the specs and design hold up to the new Meizu Pro 6.

The LG G3 was one the first mass-produced smartphones to start using a QHD display, so it should come as no surprise the LG G5 sports a 5.3-inch IPS LCD QHD display and added the new ‘always-on’ display feature to save battery life.  The QHD resolution packs 2560 x 1440 pixels and gives the LG G5 a hefty 554 pixels-per-inch (PPI.)  The processor is the newest Qualcomm Snapdragon 820 quad-core processor with a dual-core clocked at 1.6GHz and a dual-core clocked at 2.15GHz.  It is matched to an Adreno 530 GPU for outstanding graphics under any circumstances. The G5 packs in 4GB of DDR4 RAM and 32GB of internal memory that is expandable to 2TB via a microUSB card.

This year, every manufacturer redesigned their camera areas – and we are not talking about just upping the megapixels, but a total redesign.  The LG ‘G’ series kept the single 16MP sensor, as found on the LG G4, but then added another 8MP wide-angle sensor, along with new software on the new LG G5.  For normal shots, the 16MP shooter is used, but the wide-angle of the 8MP lens allows the user to capture more in the photo.  LG did retain the excellent 8MP FFC from the G4 for selfies and video chatting.  LG decreased the battery size to 2800mAh, but it is still removable and has quick charge capabilities.

With the LG G5’s modular design, LG had to rearrange a few items.  They removed the rear controls to allow room for the fingerprint sensor, but LG did design the fingerprint sensor to click inward and act as an on/off switch.  The volume controls were subsequently relocated back to the side of the device.  The LG G5 does retain its built-in IR Blaster and FM radio.  The LG G5 measures 149.4 x 73.9 x 7.7 mm, weighs in at 159 grams and comes in Silver, Titan, Gold, and Pink.  The LG G5 is available on all the leading US carriers, and it will cost you about $625. 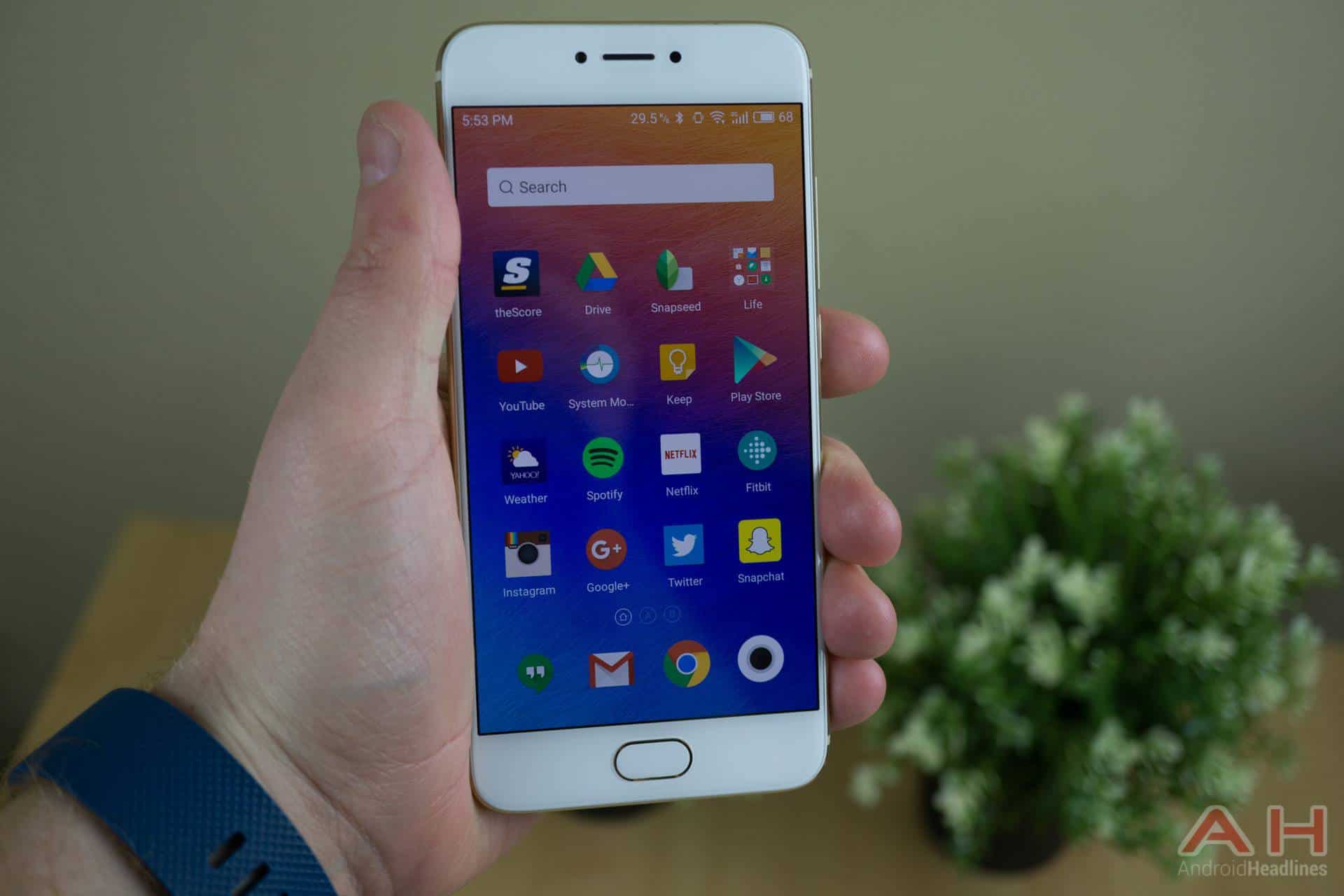 The Meizu Pro 6 is one of those all-metal smartphones designed with that iLook in mind – right down to the same antenna lines.  This is not to say that the Pro 6 is not a great looking smartphone as it is beautiful looking with a nice feel to it – what you expect from a premium flagship design.  However, does it have the specifications to beat out the LG G5 in this comparison?  Competitively priced, the Meizu Pro 6 offers up a great combination of features, but what are you giving up to save those dollars.  Let’s take a closer look at the Meizu Pro 6 and see how it stacks up against the LG G5.

The Meizu Pro 6 sports a 5.2-inch FHD Super AMOLED display with a resolution of 1920 x 1080 pixels, but still a respectable 423 PPI due to the smaller screen size.  The display uses their version of the 3D Touch technology – they call it mPress.  It is very reminiscent of the feature on the iPhone.  The brain in the Pro 6 is an unusual deca-core MediaTek MT6797T Helio X25 processor.  It uses a dual-core Cortex-A72 clocked at 2.5GHz, a quad-core A-53 clocked at 2GHz, and a quad-core A53 clocked at 1.4GHz.  For graphics, the Pro 6 uses the quite capable Mali-T880 MP4 GPU.  It packs 4GB of the slower DDR3 RAM and either 32GB or 64GB of internal memory with no means to expand.

The primary camera on the Pro 6 uses the same Sony 21MP sensor that was in the Pro 6’s predecessor with an aperture of f/2.2, phase detection autofocus (PDAF) and a 10x dual tone ‘Ring flash’ that encompasses the lens and puts out quite a bit of evenly dispersed light.  A 5MP FFC has a larger f/2.0 aperture for taking selfies and video chatting.  The photos from the Pro 6 are very respectable for a mobile camera.  Supplying the power is a 2560mAh non-removable battery with rapid charging – Meizu calls their version, mCharge and you will get a 26-percent charge in only 10 minutes and 100-percent charge in 60 minutes.

This is one of those comparisons where the more expensive smartphone beats out the cheaper device in the pure specification and features, so I am crowning the LG G5 as the winner of this comparison. However, if the modular idea is a turn-off, you don’t want the better camera, faster RAM (DDR4 RAM is really faster than DDR3), expandable memory, the QHD display, or the IR Blaster then you may want to purchase the cheaper priced Meizu Pro 6 and save yourself $200+ in money.

The Meizu Pro 6 is a beautiful smartphone, all-metal backing, solid in your hand.  However, it does have the FHD display, slower RAM, non-expandable memory, so you are stuck with either 32GB or 64GB and a non-removable battery. The Pro 6 will not work on all networks due to its band limitations – 4G worked fine on T-Mobile when our test unit was taken outside.

The LG G5 will work on any US network and it will take more of your money, but if you want the tops in specifications and usability, then the LG G5 is the smartphone of choice in this comparison.