Do we have a good one for you today – the new all metal LG G5 goes up against the new all-metal Huawei P9.  While the LG G5 marches to the beat of a different drummer, the Huawei P9 has a sort of i-look to it – not saying it is bad looking – both devices are solid and premium looking in every way.  Both devices comfortably fit in your hand for extended periods.  Which one of these new devices will win this specification comparison? Let’s first see what these two devices share before we take a closer look at each.

The LG G5 and Huawei P9 do have a few things in common – for starters, they are very close in physical size with the LG G5 slightly larger and weighing in 15 grams heavier.  They both use the IPS LCD technology in the nearly identical sized displays – 5.3-inches on the G5 and 5.2-inches on the P9 – but they have different resolutions.  They both have 32GB of internal storage and both possess a microSD card slot for expansion.  The LG G5 packs 4GB of DDR4 RAM and the P9 comes with a base 3GB, but there is also a 4GB/64GB model as well.  Both devices use a dual camera for the primary shooter and both have an 8MP front-facing camera (FFC) for selfies and video chatting.  The LG G5 and Huawei P9 have the usual suspects – WiFi, Bluetooth 4.2, GPS, NFC, fingerprint sensor, and a Type-C reversible port for charging and data transfer.

The LG G5 as the first smartphone using ‘slide-in’ modules – push a button on the lower side, slide out the bottom ‘chin’ of the device along with its battery.  That slot can be used to slide in a replacement battery or different modules that add more functionality to your LG G5.  While these modules are an exciting concept, they raise just as many concerns – will developers make modules, how expensive will they be, will those modules be usable in future devices (LG G6)?  Whatever the outcome, you have to admire them for taking a risk.  LG put some intense thought into its LG G5 – not only did they go from plastic to a metal body – they kept those essential features – memory expansion and removable battery and still included some innovation.  Let’s take a closer look at the new LG G5 and see just how the specs and design hold up to the new Huawei P9.

LG was one of the first manufacturers to jump into using a QHD display – so naturally, the LG G5 sports a 5.3-inch IPS LCD QHD display to which they added the ‘always-on’ display feature.  It packs a resolution of 2560 x 1440 pixels and 554 PPI.  The processor is the newest Qualcomm Snapdragon 820 quad-core processor with a dual-core clocked at 1.6GHz and a dual-core clocked at 2.15GHz with an Adreno 530 GPU to handle the most demanding graphics you can throw its way. The G5 packs in 4GB of DDR4 RAM and 32GB of internal memory, expandable to 2TB via a microUSB card.

LG also took another leap of faith with a redesign of their camera area this year by going from a single 16MP sensor, as found on the LG G4, and then added another 8MP sensor, along with new software on the new LG G5.  The 8MP has a wider angle, allowing the user to capture more in the photo.  The G5 retained the excellent 8MP FFC from the G4 for selfies and video chatting.  LG dropped the battery size from the 3000mAh found on the LG G4 to 2800mAh, but it is still removable and has quick charge capabilities

LG retained its built-in IR Blaster and FM radio, but removed the rear controls and placed the fingerprint sensor in their place.  The fingerprint sensor does click inward to act as an on/off switch with the volume controls relocated to the side of the device.  The LG G5 measures 149.4 x 73.9 x 7.7 mm, weighs in at 159 grams and comes in Silver, Titan, Gold, and Pink.  The LG G5 is available on all the leading US carriers, and it will cost you about $625. 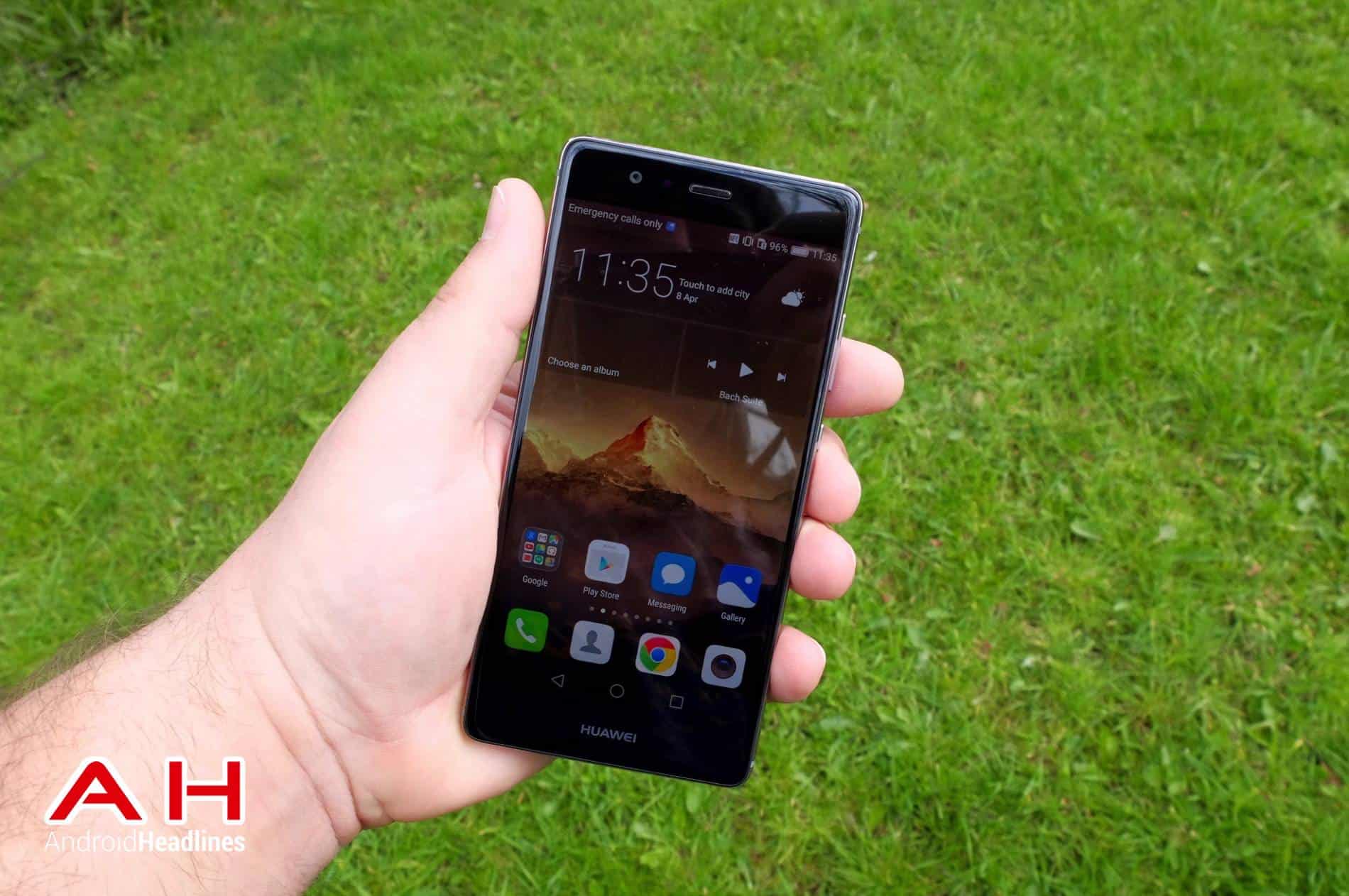 Huawei is still working its way to the hearts of the US users and made huge strides last year with their well-received Nexus 6P.  The new Huawei P9 is their next generation ‘P’ series smartphone and while the device itself is beautiful, the P9 series is all about the lens and camera.  They teamed up with lens maker, Leica to provide dual 12MP shooters.  The Galaxy S7/S7 Edge, the LG G5, and the new HTC 10 are also very camera oriented, and with good cause as the smartphone camera is taking over as the new generations’ point-and-shoot.  The P9 series looks much like other Huawei devices – the popular Nexus 6P and Huawei P8 – with a little iPhone thrown into the mix.  The P9’s aluminum-clad body is as beautiful to look at, as it is to hold.

The Huawei P9 comes with a 5.2-inch IPS LCD FHD display with a resolution of 1920 x 1080 pixels and 423 PPI.  The P9 uses a HiSilicon Kirin 955 octa-core processor with one quad-core clocked at 1.8GHz and another quad-core clocked at 2.5GHz, and the Mali-T880 MP4 GPU provides the graphics.  It packs 3GB of DDR4 RAM and 32GB of internal memory that is expandable by 128GB via a microSD card – there is also a 4GB/64GB model available.

Leica optics is the emphasis on the Huawei P9 series, and the lenses are paired with dual 12MP (Sony IMX286) sensors – one handles the RGB camera, and the other is a monochrome camera.  Huawei claims the monochrome lens can capture more detail than the RGB lens.  Put together, they should produce some excellent photos along with an aperture of f/2.2, dual LED flash, and laser autofocus although there is no OIS.  Huawei uses an 8MP with autofocus and f/2.4 FFC for selfies and video chatting. Providing the power is a 3000mAh non-removable battery.

What does the Huawei P9 offer that the LG G5 does not? I cannot think of a thing. It measures 145 x 70.9 x 7mm, weighs in at 144 grams, and is available in Ceramic White, Haze Gold, Rose Gold, Titanium Grey, Mystic Silver, and Prestige Gold with a price of about $650 – $700.  Huawei announced that the P9’ release in Europe and Asia, and while there were no specifics mentioned regarding a US version, word has it that Huawei will bring the P9 series to the US later in the year.  It is running Android 6.0 Marshmallow with Huawei’s Emotion UI 4.1.

This comparison was a little tough because both devices have the credentials to win, but the LG G5 has just enough to force me to choose it as the winner of this specification comparison.  The Huawei P9 is certainly a worthy competitor, but it lacks in a couple areas that I just could not overlook, especially when they cost essentially the same.

The LG G5 has a QHD ‘always-on’ display for starters and a better overall experience than the FHD display on the P9.  While the Kirin processor in the P9 is no slouch, the Snapdragon 820 with its Adreno 530 GPU is just a little bit better.  The LG G5 also comes stock with 4GB of RAM, it still costs no more than the 3GB/32GB P9 model, and it can expand past the 128GB limitation found on the P9. The LG G5 also provides a built-in IR Blaster – something only found on the P9 Plus model.  The LG G5 also has the modules and removable battery.

The Huawei P9 just does not have anything over on the LG G5 – both devices have an interesting camera area and both will take great pictures.  If the P9 was a couple of hundred dollars cheaper, I might have chosen it as the winner, but with both devices carrying the same price tag, the LG G5 just has more to offer.