When it comes to smartphone cameras, sensor optimization is key. Since a smartphone can’t fit the kind of full-frame lens that a DSLR might have inside, and megapixels only mean so much, optimization for a better picture can be done two ways; on the software side, OEMs can optimize their camera software to work beautifully with the sensor, providing maximum quality and detail, as seen in the Samsung Galaxy S7. The other way a smartphone camera can be optimized is through more advanced sensor technology, squeezing more detail and less noise out of the kind of sensor sizes that would work for a smartphone. Naturally, the latter falls to sensor providers like OmniVision, who recently announced their new OV12890 sensor.

The OV12890 is a 1/2.3-inch sensor packed with state of the art technology, like OmniVision’s own PureCel Plus stacked-die technology, which allows OmniVision to design the chip inside the sensor with multiple layers for optimal use of space. The PureCel Plus tech also lends the sensor support for phase detection auto focus, and allows for faster 12-bit data passthrough, higher sensitivity, a better signal-to-noise ratio in comparison to its predecessors and current sensors on the market. The sensor bears 1.55 square micropixels, for a maximum resolution of 4096 x 3072. Dual camera support is improved compared to predecessors, high frames per second is supported in videos, and frame rate, mirror and flip, cropping, and windowing can be controlled and programmed. The chip also bears onboard flash and strobe control, as well as controls for defect pixel correction, automatic black level calibration, and lens shading correction. A built in temperature sensor and support for a wide variety of formats, including RAW, round out the feature set.

The new sensor is available to OEMs now for sampling, tests and prototyping, but isn’t expected to enter mass production until close to the end of the year. The new sensor furthers the push for detail, pixel performance and image quality as the megapixel war comes to its inevitable end, with consumers increasingly leaning toward smartphone cameras that are more optimized and efficient, as opposed to going for raw resolution and high detail at the expense of high noise. 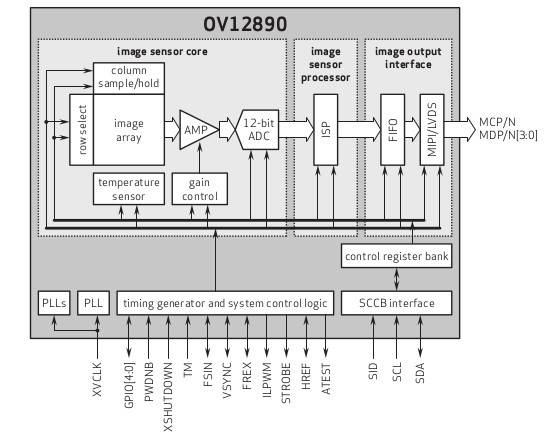