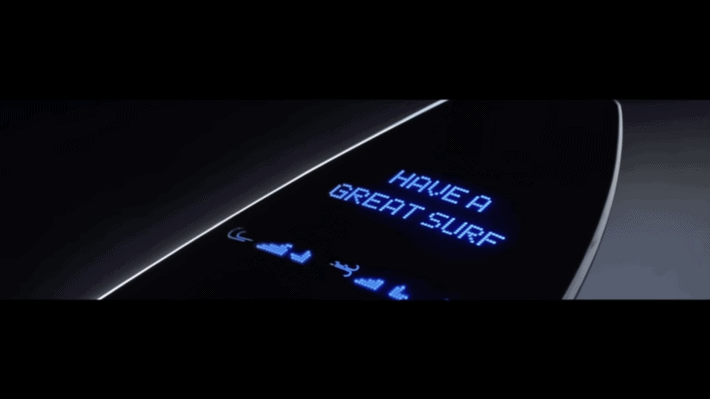 If you surf, you probably know it can be a bit lonely out on the waves, depending on where you go. For some, this is part of the appeal of surfing, a sort of zen. For others, though, enjoying their favorite hobby may be a bit less painful if they could just stay connected to the people they care about while riding the open sea. For that second crowd, one of those out-of-left-field, distinctly Samsung innovations may be the answer. They've already got the experience-changing curved TV, the smart fridge nobody knew they wanted and the smart clothes that could revolutionize business networking under their belts, so when it comes to a surfboard, "why not?" may be a good question.

The quirky board has a slot to slide in a smartphone to serve as the brains of the operation. A Samsung Galaxy S7 was used in the promo video, with no official word as of yet on whether other devices may be compatible. Naturally, the device should probably be water resistant, in any case. The board feeds notifications from the smartphone held in its guts, such as text messages and Twitter notifications while also using the phone's internet connection to retrieve useful information like current ocean conditions, tidal cycles, and surf height. As the board shown is custom made and, for the moment at least, not commercially available, the software picks up tweets with the hashtag #GOMEDINA and delivers them to the board, owned by pro surfer Gabriel Medina.

The comments section of the YouTube source makes it quite clear that the usefulness of such a board is a divisive issue at best, but the video quite clearly demonstrates its uses. More than anything, it seems to be a proof of concept, to show watchers and insiders that Samsung can still think outside the box and can outfit just about any object with technology. If for whatever reason, you fancy such a board yourself, you would likely have to contact Samsung's customer service and have it custom made. Obviously, a price for such an order was not listed, if it is available.