In less than a week’s time, Motorola is expected to unveil its most powerful mid-range smartphone ever – the fourth-generation Moto G. While there’s still no agreement among large sections of the tech media on whether the upcoming device will be marketed as the Moto G4 or Moto G (2016), the fact remains that many of the other details are already in public domain, including the fact that the company is likely to release not one, but two variants of the device this time around. While the more interesting model, said to be called the Moto G Plus, will sport a fingerprint scanner and a 16-megapixel primary camera, the base version will reportedly only have a 13-megapixel camera on the back and forgo the fingerprint scanner altogether.

However, even as the two Moto G models are expected to differ on some fronts, they will still come with fairly similar hardware otherwise, including a 5.5-inch, 1080p display panel and a Snapdragon 617 SoC. Now, the upcoming device has popped up on the Geekbench database, giving us an idea about what to expect from it once launched. Most of the specifications listed on the Geekbench site tallies with what we already know about the upcoming device, so there’s not a whole lot of surprise on that front. According to Geekbench, the Moto G4 will be powered by the MSM8952 chipset (Snapdragon 617), sport 3 GB of RAM and run Android 6.0.1 Marshmallow out of the box.

While rumors about Motorola’s upcoming launch is coming thick and fast, it’s important to look at what we do know as facts. The company has already sent out invites for an event to be held on the 17th of this month in the Indian capital of New Delhi, although, there’s no word officially on what to expect on that day. However, the international tech media is almost unanimous in their belief that the company will launch the two aforementioned models at the event next week. The company has also organized a simultaneous event in Brazil and invites to that particular event actually mentions the Moto G specifically by name, it would be a massive surprise if the company doesn’t unveil its fourth-generation Moto G devices next week. 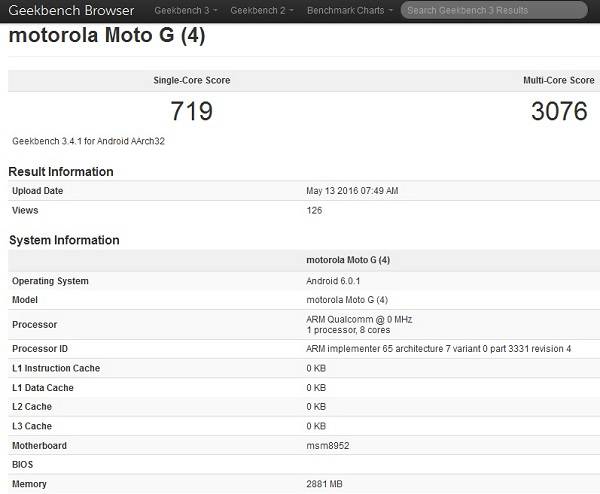