Huawei and ZTE are amongst the largest smartphone manufacturing companies in China. For comparison’s sake, Cristiano Ronaldo and Lionel Messi are, according to quite a few people, the two best footballers in the world at the moment. That being said, each of these footballers is a brand ambassador for a Chinese smartphone manufacturing company, Lionel Messi is on Huawei’s side, and Cristiano Ronaldo has recently signed a deal with Nubia, ZTE’s subsidiary.

Cristiano Ronaldo has popped up in the latest Nubia Z11 Max teaser a couple of days ago, soon after he signed an agreement with Nubia, and it’s Messi’s turn now. Huawei has just introduced the special edition of their flagship phablet, the Huawei Mate 8 with Lionel Messi’s signature. This phablet sports the same specs as the original that was announced back in November, and it even looks the same, aside from Messi’s signature on the back, of course. This special edition device will be available in Mocha Gold color only, and it will be available for 4,399 Yuan ($670) in China. Keep in mind that this variant of the phone comes with 4GB of RAM and 128GB of internal storage, so you won’t have the option to purchase the 3GB RAM model, for example. We still don’t have any info regarding availability of this handset outside of China, but we’ll keep you updated.

The Huawei Mate 8 features a 6-inch fullHD (1920 x 1080) display, and it is made out of metal. The special edition version of this handset comes with 4GB of RAM and 128GB of internal storage, though the regular model is available in more variants. The device is fueled by the Kirin 950 64-bit octa-core processor, along with the Mali-T880 MP4 GPU. The 16-megapixel OIS shooter is placed on the back of this device, and an 8-megapixel camera is placed up front. Android 6.0 Marshmallow comes pre-installed here with Huawei’s Emotion UI 4.0 which is installed on top of Google’s OS. There are two SIM card slots on the inside of this device, and a 4,000mAh battery is also a part of this package, and it is not removable. The phone measures 157.1 x 80.6 x 7.9mm, while it weighs 185 grams. 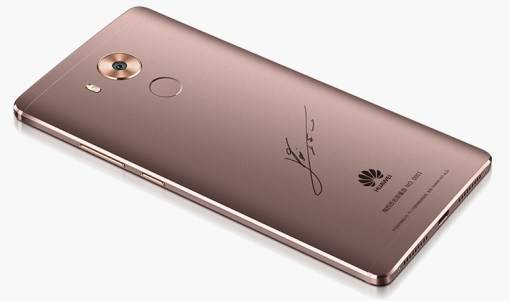