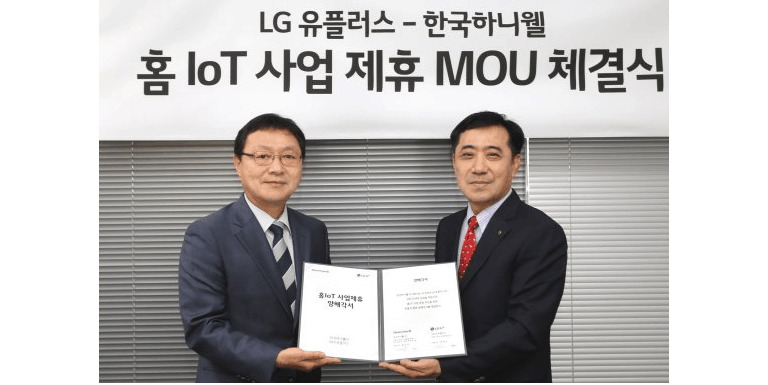 The Internet of Things is a sector that is just starting to take off, but as the technology starts to get more sophisticated and consumers start to look for the next big thing, it's important to be there right out of the game. For Korean names LG and Samsung, that's just what they want to do. LG U+, the South Korean network owned by LG, has recently been testing interoperability with the oneM2M standard, and now they've signed an memorandum of agreement (MOU) with a big consumer electronics firm, Honeywell.

The MOU is of course between LG U+ and Honeywell Korea, but there's no reason that this sort of agreement can't be done elsewhere with different divisions and so on. The MOU will see Honeywell Thermostats controlled through the LG U+ network, which will help users better control their homes without the need of a secondary hub or special WiFi software. Moreover, the two are exploring options to have these new Honeywell Thermostats developed in conjunction with LG U+ integrated into new apartment buildings and homes. Such a thing would of course be beneficial for both LG U+ and Honeywell, essentially locking down these buildings into using their services to control the heating, but with the oneM2M standard there could be hope of using other services with these pieces of hardware.

For LG U+, this brings much-needed knowledge of Thermostats and heating systems in general, as Honeywell has been involved in the market for decades now. The two are also said to be working on a system that will automatically adjust the indoor temperature of a building in relation to the outdoor temperature, automatically, without the need for the user to do anything. This is the sort of thing that will help LG and LG U+ in South Korea develop a lead over other companies looking to try the same sort of thing, and it should help the South Korean firm gain some traction against their rival, Samsung, who already has a range of IoT products on sale in many parts of the world. With the Internet of Things sector taking off, this deal could be key for both parties going forward.