Lenovo is one of the largest China-based tech companies out there, and it seems like the company plans to release some hardware really soon. Lenovo has already announced that they’ll hold a press conference on June 9th at Tech World 2016, and pretty much every report suggests that we’ll see new Moto-branded smartphones released there. That’s not all though, the latest report also claims that Lenovo plans to release the Lenovo Project Tango smartphone at said press conference, and judging by the new GFXBench listing, the Lenovo-branded tablet is on the way as well.

The Lenovo PB2-690N is the company’s upcoming tablet it seems. This device has been benchmarked by GFXBench quite recently, and believe it or not, it sports an 18.4-inch QHD (2560 x 1440) display. This actually makes this display identical to the one we’ve seen on the Galaxy View, at least in terms of sheer size. This tablet will be fueled by either the Snapdragon 650 or Snapdragon 652, and will ship with the Adreno 510 GPU for graphics. The device will sport 4GB of RAM and 64GB of internal storage, while the listing says Android 6.0.1 Marshmallow will come pre-installed on this device. Now, it also says ‘Android Google Edition’ below the Android version, which is quite unusual for a GFXBench listing. Interesting enough, we’ve seen a similar listing earlier today when the ZUK R1 surfaced on GFXBench. Does this mean we’ll see several devices rocking stock Android, or is this just a new feature on GFXBench which indicates that Android is Google’s product? Well, we’ll have to wait and see, we can only guess at the moment. In addition to everything we’ve said thus far, the Lenovo PB2-690N will feature an 8-megapixel snapper on the back, and a 0.3-megapixel shooter will be available on its front side.

There you have it, it seems like Lenovo is planning to release a Galaxy View competitor soon. This tablet will be huge, as its display indicates, and Lenovo seems to be ready to launch it despite the fact Galaxy View sales didn’t exactly shine. Such huge tablets have limited usability, and that’s probably what people find issues with. Either way, we’ll let you know as soon as Lenovo shares more info. 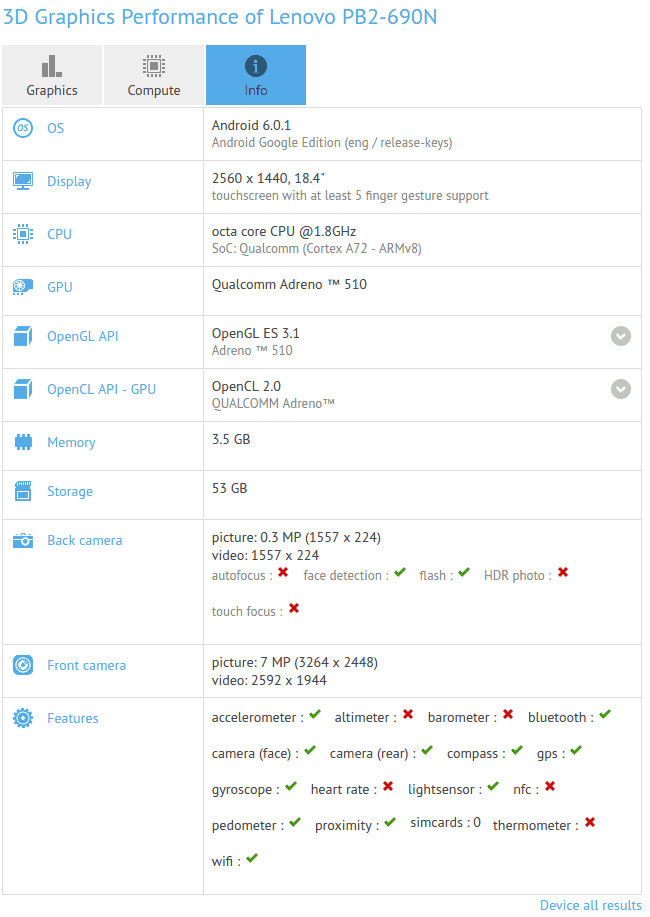