Skip to content
Advertisement
Trusted By Millions
Independent, Expert Android News You Can Trust, Since 2010
Publishing More Android Than Anyone Else
5
Today
5
This Week
696
This Month
6430
This Year
116404
All Time
Advertisement ASUS tasted success with its first and second-generation ZenFones over the past couple of years, so naturally, the company seems quite upbeat about its third-gen ZenFone 3 line, which is all set to be unveiled at the upcoming Computex 2016 event in Taiwan. The company has generally been fairly low-key with the marketing of its earlier ZenFones, but this time around, it seems as though it is taking a leaf out of the book of many other vendors who market their gadgets heavily online. Towards that end, the company has now released an all-new .gif video on its official Twitter account, teasing its upcoming ZenFone 3. The company had earlier released a teaser video on YouTube, showing off three different handsets which are expected to be launched as different variants of the ZenFone 3.

As for the latest video, it flashes a few seemingly random numbers on the screen, but the subsequent message makes it amply clear that the numbers aren’t exactly random after all. The numbers being teased in the video are 92, 4, 23 and 3, and the video itself comes with a tweet that reads: “92/4=23, but what about the other 3? What’s the relevancy of all these numbers? #Asus #Z3N and #Computex2016”. While ASUS hasn’t really given out any clues beyond that, online speculations seem to suggest the company might be hinting at a 23-megapixel camera that comes with a 92-degree wide angle lens and has the ability to record 4K videos.

Whether or not that is indeed what ASUS is suggesting remains to be seen, but seeing as the ZenFone 3 is expected to be powered by the Snapdragon 820, the device may well come with come with 4K recoding. The video also seems to show a few concentric circles with what looks like a camera lens in the middle. Either way, the device is expected to be unveiled in Taiwan in just a few days’ time, so it isn’t long before we’ll all get to know more about ASUS’ upcoming flagship. Meanwhile, alongside the Qualcomm Snapdragon 820 and the 23-megapixel camera, some of the other rumored specs for the top-end model include a 5.5-inch 1080p display panel, 4 GB of RAM and a USB Type-C port for charging and data syncing. 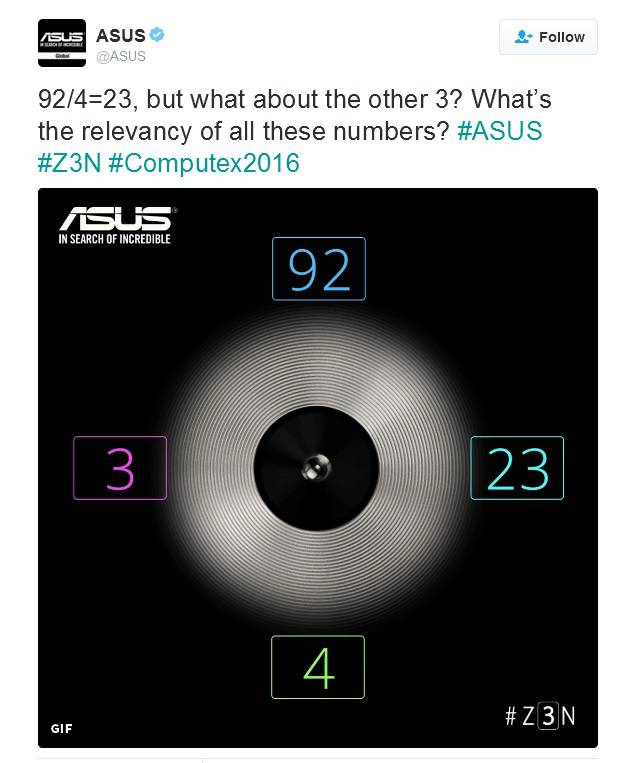