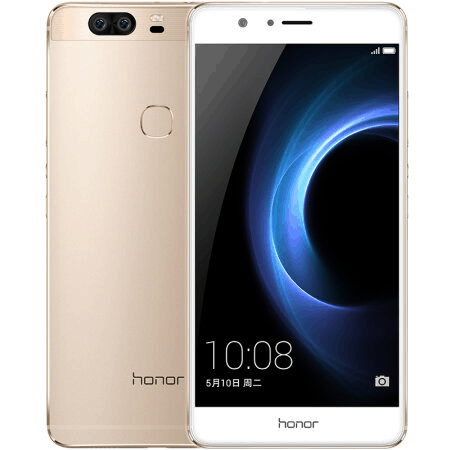 Huawei’s Honor brand was one of the main contributors to the company’s bottom line last year, helping it dislodge Xiaomi as the leading smartphone vendor in China. The company has now announced a new phablet called the Honor V8 that it hopes will be able to sustain its momentum this year as well. The device had leaked online a few times earlier, but now that it is official, let’s take a look at its spec-sheet. The Huawei Honor V8 features a 5.7-inch QHD (2560 x 1440) display panel on its top-end variant, but as expected, the company has also released a couple of more affordable models that come with 1080p screens. The phablet runs Android 6.0.1 Marshmallow with an EMUI 4.1 overlay and packs in 4 GB of RAM and either 32 or 64 GB of built-in storage, depending on the model.

As for the processor, the device is powered by a HiSilicon Kirin 950 SoC, which comes with an integrated 64-bit octa-core CPU with four ARM Cortex-A53 cores and four ARM Cortex A-72 cores. The chip can also be found in the Huawei Mate 8, and is the predecessor of the HiSilicon Kirin 955 that powers the company’s latest flagship smartphones, the Huawei P9 and P9 Plus that were launched last month in London, UK. Meanwhile, the top-end model with the QHD panel also sports an NFC chip, but all versions of the device come with support for dual-band Wi-Fi, Bluetooth 4.2 and GPS navigation, which is par for the course for just about all modern-day smartphones irrespective of their positioning in the market.

The smartphone also comes with an infrared blaster, a 3D fingerprint scanner, USB Type-C connectivity and a 3,500 mAh Li-ion battery. However, what’s really interesting is that the Honor V8 also sports a dual rear camera setup with two 12-megapixel cameras, although there’s no word on whether it’s the same Leica module that can be found in the Huawei P9 line. Meanwhile, Huawei has priced the device at 2,299 yuan ($352) for the base version with the 1080p display and 32 GB storage, while the top-end variant with the QHD display and 64 GB storage will cost 2,799 yuan ($429) in China. The company also took the opportunity to introduce a new VR headset for 129 yuan ($20) and a new smart fitness bracelet called the Honor A1, which is priced at 99 yuan ($15) for the standard version and 199 yuan ($30) for the model that comes with a leather strap.