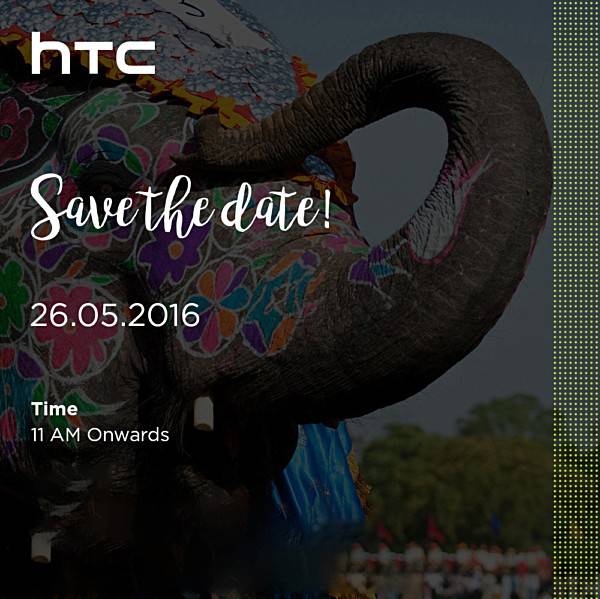 The HTC 10 is the company's all-new flagship. This smartphone was introduced last month during HTC's press event, and it is already on sale in a number of areas. The HTC 10 is made out of metal, and unlike its predecessors, this handset sports a front-facing fingerprint scanner which doubles as a capacitive home button. As already mentioned, the device is available in a number of areas, but not in India. Well, that won't be the case for long, HTC is going to introduce their new flagship in that Asian country soon, read on.

This Taiwan-based company has started sending out event invites for the HTC 10 launch in India. The device will be announced on May 26th, and yes, this is the flagship version of the HTC 10, not the lower-end 'Lifestyle' variant which was said to be on the way to India. The press event will kick off at 11AM (local time), for those of you who are interested. The HTC 10 sports a 5.2-inch QHD (2560 x 1440) display, 4GB of RAM and 32GB / 64GB of expandable internal storage. The device is fueled by Qualcomm's Snapdragon 820 64-bit quad-core SoC, along with the Adreno 530 GPU, which is the best Qualcomm has to offer at the moment. The 12-megapixel OIS camera is placed on the back of the HTC 10, and a 5-megapixel snapper can be found up front. Android 6.0.1 Marshmallow comes pre-installed on the HTC 10, and on top of it, you'll be able to find HTC's custom UI. The phone comes with two speakers, and the Type-C USB port is placed on the bottom of it. The 3,000mAh battery is also a part of this package, and you do get Qualcomm's Quick Charge 3.0 fast charging here as well. The HTC 10 measures 145.9 x 71.9 x 9mm, while it weighs 161 grams.

That is more or less it. We still don't know how much will the HTC 10 cost once it gets launched in India, nor whether the company plans to launch both 32GB and 64GB of the device. Either way, stay tuned, we'll make sure to let you know if any additional info surfaces before the device gets announced, as usual.