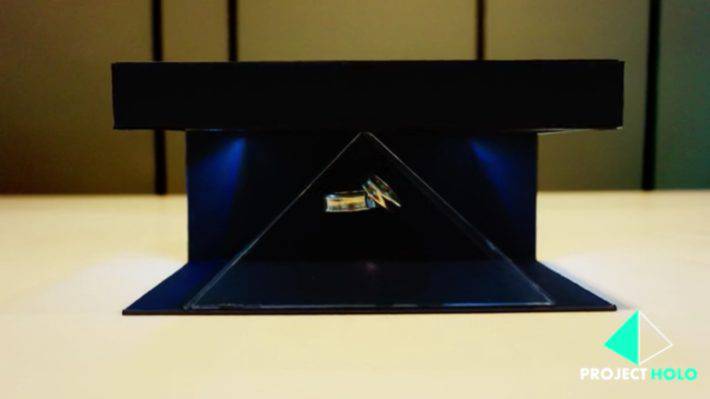 There are large numbers of DIY projects that allow you to project a holographic image from your smartphone screen, but most of those projects lack polish and, for the most part, you won't be able to purchase them ready-made. They also have their limits, as a result of the way they're built, as to how they can be used. Mostly, they can just be used to project videos from your phone's screen into a holographic environment. They also tend to be a bit on the small side. In order to make holographic projection and mixed reality easier for the masses, the HOLO CardBoard has popped up on Kickstarter.

The project promises a simple, affordable solution for small-scale mixed reality and, of course, basic holographic projection of videos from your phone's screen. The video from the Kickstarter page shows off various small objects being given a new lease on life, such as toy cars from Inital D, about the size of the average die cast, and small anime figures. A figurine of Goku from Dragon Ball GT is shown being given a power boost and performing his signature attack through the power of holographic projection. Just about any gashapon or vending machine figure should work, from the common fare you see in most vending machines to the "blind bags" of toy figurines from various shows sold in places like Toys R' Us.

The project is currently still short of its goal of $3,076 needed to begin giving backers their units. Early bird units were $15 but have since sold out, leaving the cheapest tier that will net backers a unit at $19. The highest tier, coming in at about $99, nets you three units and a full suite of toy cars and Dragon Ball GT figurines. Stretch goals include mass production at $4,500, more figures and videos at $9,000 and, should the project go over $9,000 and into the $20,000 territory, the addition of strategically placed LED lights in the units. If all goes well, backers will begin seeing their units around August, which is only a couple of months away. If you're interested in checking out the technology, you can view the YouTube video below which showcases HOLO CardBoard in action.