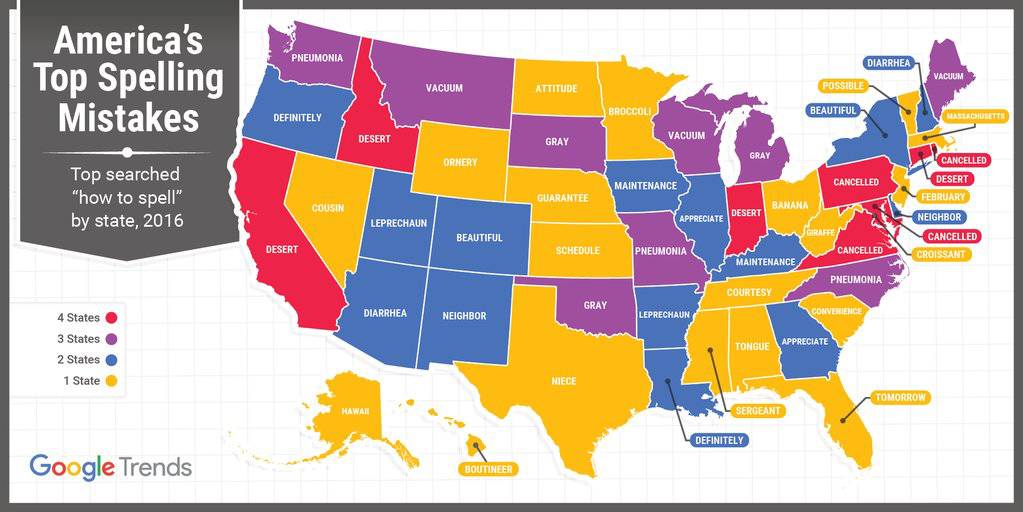 The Scripps' National Spelling Bee has recently ended and for the third year running, has joint winners: eleven year old Nihar Janga (the youngest champion) and thirteen year old Jairam Hathwar were declared joint winners after a grueling contest, after the toughest ever Spelling Bee. For 2016 and after two years of joint winners, Scripps' changes meant the two finalists had to get through three times as many words as in previous years. Both contestants misspelled two words to tie as joint champions.

In a celebration of the conclusion of the Spelling Bee, Google has released America's most searched for words to spell ordered by State. However, whereas the two contestants successfully spelled words such as Kjeldahl, juamave, groenedael and zindiq, it turns out that the most searched for words to spell correctly are considerably more mundane. Instead, in four states "desert" and "cancelled" were the most popular searched for terms. Three states searched for "pneumonia," "vacuum" and "gray." However, whilst these are the more popular terms, as we dig deeper into the data we have some surprises. These include Utah and Arkansas' preoccupation with spelling the word "leprechaun," a mythological type of fairy from Irish folklore. The State of Massachusetts most popular searched for word to spell correctly is "Massachusetts" whereas in Ohio, the most searched for word is "banana." If you study the map, you'll also see that on first impression, Alaska appears to be wrongly labelled as "Hawaii." Actually, no: for the State of Alaska, people most often search for the correct spelling of Hawaii! Perhaps dreaming of sunnier climates. For Florida, the most searched for term is "tomorrow," although it is difficult to draw any sort of meaningful conclusion from this. It is also difficult to know what to make of West Virginia's "giraffe" too.

People familiar with Google will appreciate that the search engine can correct many spelling mistakes as a matter of course, and this data has not been released: this could make for interesting reading, especially as the data presented above simply reflects what people know they cannot spell rather than what they are actually misspelling.