Skip to content
Advertisement
Trusted By Millions
Independent, Expert Android News You Can Trust, Since 2010
Publishing More Android Than Anyone Else
33
Today
219
This Week
770
This Month
4601
This Year
122177
All Time
Advertisement Samsung has been doing pretty well in terms of sales in the first quarter of the year, mainly thanks to their Galaxy S7 and S7 Edge flagship handsets. That being said, the company has introduced a number of other, mid-range devices this year, including the next-gen Galaxy J5, Galaxy J7, Galaxy A9 Pro, and the company’s all-new Galaxy Tab A 10.1 (2016). Speaking of new devices, the Galaxy C5 handset has been leaking all over the internet for weeks now, and we’re still wondering when will Samsung introduce this smartphone. A number of Galaxy C5 real life images surfaced online, the device has been certified by Bluetooth SIG, and now a new leak popped up in China, read on.

According to the newly-surfaced information, Samsung actually plans to release two ‘Galaxy C’ smartphones soon, the Galaxy C5 and Galaxy C7. Both of these smartphones will sport a metal unibody build it seems, and will be between 6 and 7mm thick. The devices will, allegedly, going to be available in Silver, Gold, Pink and Gray color variants. Now, the main difference between these two phones will be in their size, the Galaxy C5 will sport a 5.2-inch display, while the Galaxy C7 will ship with a 5.7-inch panel, at least according to the available info. Both displays will sport fullHD (1920 x 1080) resolution, and the leak also mentions that the phones will ship with Samsung’s Ultra High Quality Audio (UHQA).

Now, aside from the display size difference, it seems like these two devices will sport an almost identical spec sheet. Both the Galaxy C5 and Galaxy C7 will be fueled by the Snapdragon 617 64-bit octa-core processor, along with 4GB of RAM and 32GB of native storage. The 16-megapixel camera (f/1.9 aperture) is expected to be available on the back of these devices, and an 8-megapixel snapper will be placed up front. Dual SIM has also been mentioned by the source, and the two devices will sport 2,600mAh and 3,300mAh battery packs, respectively. Now, you’re probably wondering how much will these two phones cost, well, if the shared info is accurate, the Galaxy C5 will be available for 1,599 Yuan ($246) in China, while the Galaxy C7 will be priced at 1,799 Yuan ($276). Keep in mind that these prices will be valid for online purchases only, presuming the source’s info is accurate. 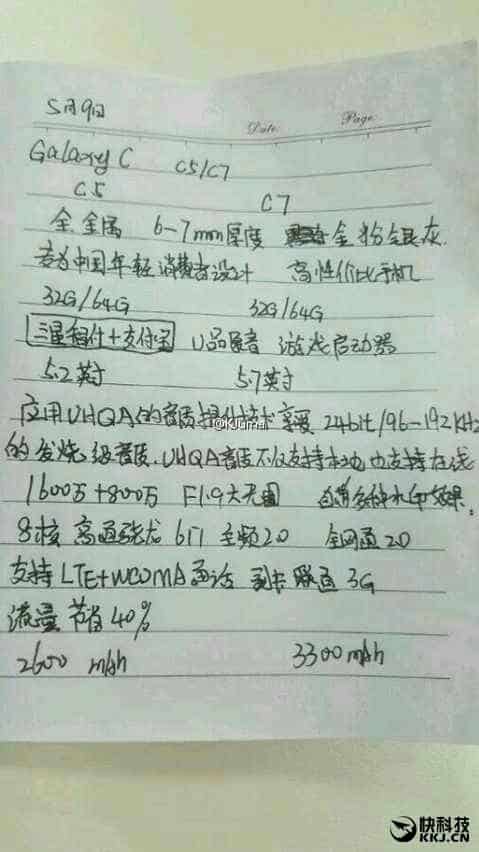