ZUK is a China-based company which is backed by Lenovo. This company has introduced two smartphones thus far, the ZUK Z1 and ZUK Z2 Pro. That being said, the third ZUK-branded device is going to be announced really soon. The company’s CEO has released a ZUK Z2 teaser image yesterday, hinting that the device will be announced soon. That image showed us a device which resembles the ZUK Z2 Pro, but is a bit different though. Rumors have been saying that the ZUK Z2 will arrive before the end of this month, and the company’s CEO, Chang Cheng, did not release any info when it comes to the phone’s release date.

That being said, pretty much everyone assumed that the ZUK Z2 will be inferior to the ZUK Z2 Pro, but that doesn’t have to be the case, at all. The company’s CEO decided to release another piece of information via his official Weibo (Chinese social network) account, he basically confirmed that the ZUK Z2 will be fueled by Samsung’s flagship Exynos 8890 processor which is utilized in the Galaxy S7 and Galaxy S7 Edge. This processor is considered to be equivalent to the Snapdragon 820, and some people even consider it to be more powerful than Qualcomm’s flagship SoC. This is quite interesting, not only because the device will sport the Exynos 8890 SoC, but also because of the way Cheng Chang released this info. The company’s CEO said something along the lines of: “I spent the day using the ZUK Z2, and I really enjoyed the Exynos 8890”. This is a quite obvious confirmation that the Exynos 8890 will be shipped along with the ZUK Z2, and the post itself was also shared through via that device. Now, the company’s CEO has also decided to tag Meizu’s CEO, Li Nan, quite probably because Meizu tends to use Samsung’s processors in some of their devices, like the Meizu PRO 5 phablet which was introduced back in September, that device was fueled by the Exynos 7420. Meizu’s CEO even responded to Mr. Cheng by saying the following: “great minds think alike”, which is also a confirmation of sorts. Rumors have been saying that Meizu plans to release an Exynos 8890-powered device this year, and Meizu’s CEO more or less confirmed that in his response.

So, there you have it, both ZUK Z2 and Meizu’s upcoming flagship will be fueled by Samsung’s Exynos 8890 flagship SoC which has proven to be quite powerful. We still don’t know when will either of those phones going to be announced though, but rumors have been saying that the ZUK Z2 might arrive before the end of this month. 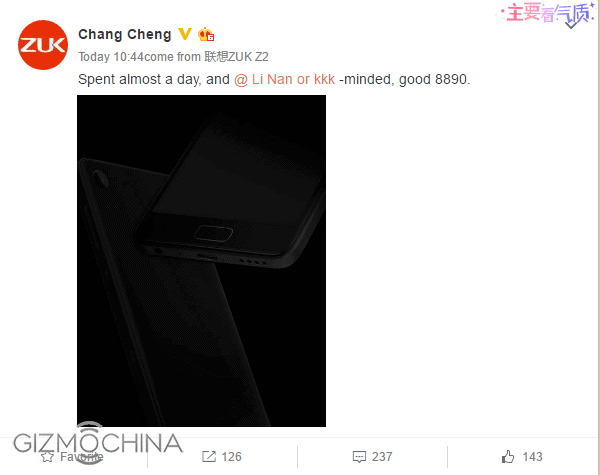