Meizu is one of the more interesting China-based smartphone manufacturing companies. They’ve managed to sell 20.5 million smartphones in 2015, which is a significant improvement over 2014 when the company shipped 4.4 million units. The Meizu MX5 and PRO 5 were the two most powerful smartphones the company introduced last year, and even though the Meizu MX6 was expected to land first this year, that device is yet to be announced, while the PRO 6 has been released last month. The Meizu PRO 6 is significantly smaller than its predecessor, and unlike the PRO 6, is it fueled by a MediaTek SoC. Many people were expecting to see the Exynos 8890 or the unannounced Exynos 8870 in the PRO 6, but did not happen. Well, judging by the newest leak, that might change soon, read on.

If you take a look at the image below this article, you’ll get to see a leaked screenshot showing off the unannounced Meizu PRO 6 variant which is fueled by the Exynos 8890 SoC. The screenshot also reveals that this device sports 4GB of RAM and weighs 160 grams. The Android 6.0 Marshmallow has also been listed here, and that’s more or less all the info we have at the moment. Now, for those of you who didn’t know this, Meizu has released an Exynos-fueled handset both in 2014 and 2015, so this information might as well be accurate. While some people praised the PRO 6, others were disappointed Meizu did not include an Exynos chip in that smartphone. The inclusion of Samsung’s flagship processor could also represent a switch to UFS 2.0 standard for the company, the Helio X25 does not support UFS 2.0 flash storage, so they already released PRO 6 sports eMMC 5.1 standard which is inferior to the UFS 2.0.

Now, we cannot confirm the authenticity of this information considering it is based on a leaked screenshot, but we did expect to see an even more powerful Exynos-fueled smartphone released by Meizu sometime this year, and this might as well be it. We don’t know if the rest of its specifications will be identical to the regular PRO 6 variant, we’ll just have to wait for more info to surface, as usual, so stay tuned. 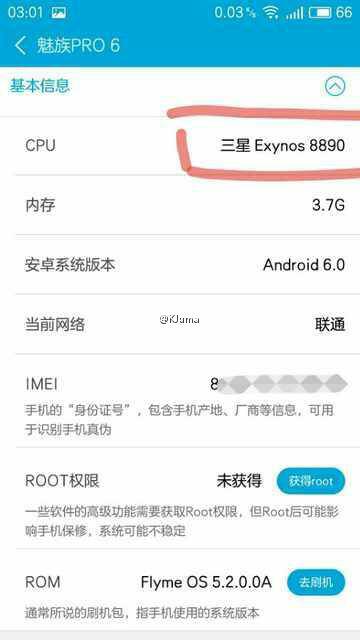