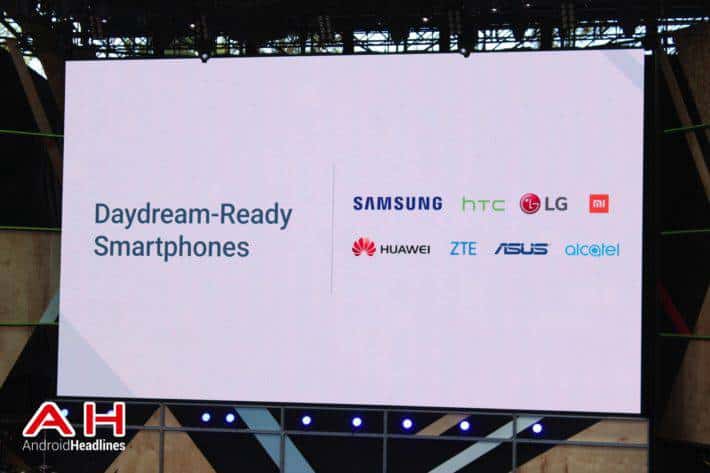 Today during the Google I/O keynote speech, Google announced quite a few things, part of which was the new build for Android N as the third developer preview. Android’s long awaited native VR platform was also announced and is officially called “Daydream,” set to be built-in as part of the Android N version of the OS. While the Daydream feature will require Android N to work, Google states that there are already a list of supported device manufacturers who are building devices that will be Daydream-ready, which includes HTC, Samsung, LG, ZTE, Huawei, ASUS, Xiaomi, Alcatel, and more, although the ones listed in the image above are the only that appear to be in the works so far.

For the time being there are no exact dates or details on pricing, but Daydream is expected to launch later this year in the late Summer or early Fall, and phones that support Daydream should be available right around the same time although it’s highly unlikely that devices from all of these manufacturers will launch alongside Daydream. When it comes to hardware, Google notes that developers will be able to build their own products based on the reference design of the headset that was shown off at the Keynote speech during Google I/O this morning, but Google’s initial concept will also launch in the Fall and come with a controller to be used for interaction.

When the Daydream platform and the devices which support it hit the market and are available to the public, devices will be able to utilize new VR versions of YouTube, Google Play Movies, and more as Google rolls out other apps in a Daydream VR format. As Daydream will be part of the Android N software build, that means devices which are Daydream-ready will launch with Android N running out of the box, so it’s likely that the new Nexus device or devices will be included as part of those which are set up to use Daydream when the platform launches. Daydream centers around hardware and software, so consumers will end up seeing physical and software-related products come to market in addition to the VR headsets themselves.