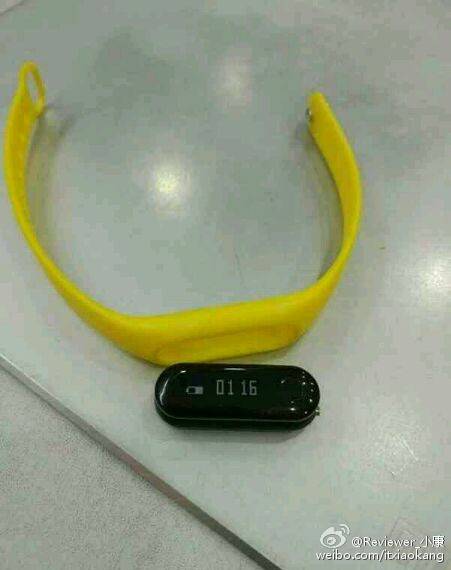 Following the announcements of Redmi 3 Pro, Redmi Note 3 and Mi 5, Xiaomi is getting ready to introduce some new hardware on May 10th. The company has confirmed that the Xiaomi Max phablet is going to be announced on the said date, and they will also introduce the MIUI 8 OS. Now, the company’s CEO shown off the Mi Band 2 fitness tracker the other day, and even though he didn’t confirm that gadget will launch on May 10th, it might happen.

That being said, the Xiaomi Mi Band 2 has surfaced yet again, and this image actually gives us a far better look at the device. If you take a look at the photo, you’ll notice that the silicone band will remain similar to the one we’ve seen on the Mi Band and Mi Band 1s, it actually looks identical to those two, but we cannot know for sure if Xiaomi made any changes here. Now, as far as the device itself is concerned, it will have a display this time around. As most of you know, the previous Mi Band fitness trackers did not sport a display, both of them featured three LED lights on the top. The Mi Band two will feature a display which will show us info in black and white it seems. This actually opens up a whole lot of possibility for the Mi Band 2, especially if Xiaomi opts to let us see notifications on that display. You’ll be able to glance at your fitness progress by looking at your wrist, rather than opening up the Mi Fit app, which is a nice option to have.

Now, having the display on the Mi Band 2 will certainly affect its battery life. The Mi Band was able to hold a charge over 1 month with constant usage, which is something MI Band 2 will hardly be able to achieve. Based on some other OEMs, the Mi Band 2 might offer 1-2 weeks of battery life, but we’re only guessing at this point, we won’t know for sure until Xiaomi unveils the device. Anyhow, the Mi Band 2 is rumored to cost around 99 Yuan, which means it will be as affordable as its predecessors. Keep in mind that this info is based on rumors, the device might cost more once it gets announced.