So next week is Google I/O. This will be a big event for all those interested in Google and Google-related aspects. As a result of the event, a number of announcements will be made detailing what the company has planned for its products over the next year. In fact, it was at this event two years ago when Google introduced Android TV. So with the next event just around the corner, what does Google have in store for Android TV this time around?

On the face of it, it would seem not much. If the media speculation is anything to go by, then this year’s event is all about virtual reality. In fact, there has been next to no rumors coming through about Android TV at I/O this year. But that is not to say that it won’t have a presence at the event. Android TV will be discussed in some capacity, the question will be how much of a capacity?

The chances are good that Android TV will be initially touched upon during the main keynote presentation. This is likely where any big or major changes surrounding Android TV will be announced. So this part of I/O will be the one to watch out for specifically. On the developer side of things, Google will be hosting another presentation on May 20th at 2PM (PST) which is designed to provide developers with information on how they can port “in minutes” their current Android apps over to Android TV. Which hopefully will prove to be beneficial in the future. The easier Google makes the process of porting Android apps over to Android TV, the more the likelihood that a greater number of apps will become compatible with Android TV.

But here is some really interesting information which could very well prove to be part of a big Android TV announcement at I/O – Google finally owns AndroidTV.com. Up until now, Android TV has not had its own dedicated website and instead has made use of an offshoot of the main Android website, namely Android.com/TV. Google had tried to pick up AndroidTV.com back in 2014 but their seeking of the domain was rejected due to what is believed to be (at the time) a lack of copyright for ‘Android TV’. The rejection came in March 2014, which was immediately before Google announced Android TV in June of that year. So the timing of Google finally getting hold of the AndroidTV.com domain (right before this year’s Google I/O) does lend to the notion that we could be seeing an announcement for Android TV in terms of its own dedicated site. How this will impact the platform does remain to be seen, but at the very least, it does further add to Google’s commitment towards Android TV, which in turn will hopefully add to the growth of the platform as a whole. 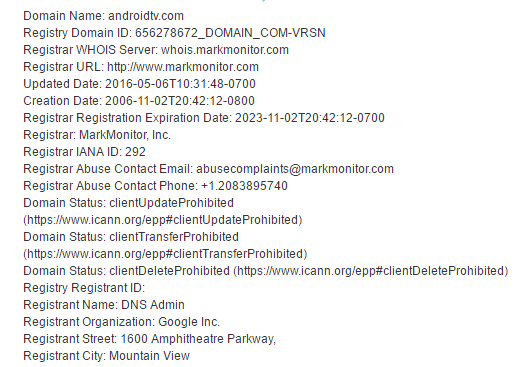