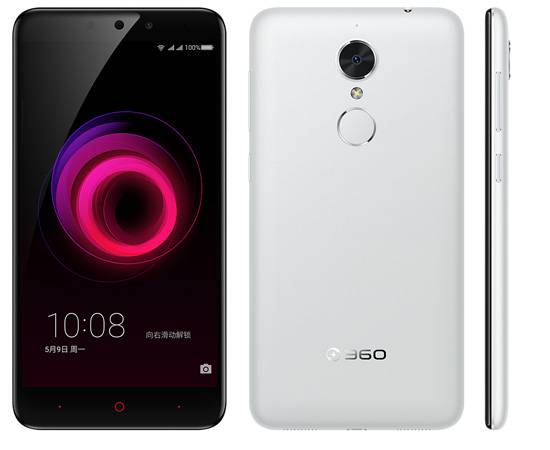 QiKU might not be the most popular brand out there, but this company has introduced three very interesting smartphones last year, including the QiKU Q Terra flagship. That being said, we were waiting for the company to introduce their new lineup this year, and instead, the company changed their name basically. QiKU has been backed by Qihoo 360, a very well-known company in China, and it seems like Qihoo 360 decided to re-brand QiKU to '360'. The company has introduced the 360 F4 and F4 Pro smartphones earlier this year, and the 360 N4 flagship handset has been certified by TENAA (China's equivalent to the FCC) last month. The company has confirmed that the 360 N4 will be introduced in China on May 9th, and that's exactly what happened, read on.

The 360 N4 is exactly what we thought it will be, TENAA's listing was spot on. The 360 N4 sports a 5.5-inch 1080p (1920 x 1080) 2.5D curved display, along with 4GB of RAM and 32GB of expandable internal storage. The device is fueled by MediaTek's Helio X20 64-bit deca-core processor clocked at 2.3GHz, and Android 6.0 Marshmallow comes out of the box with 360 OS available on top of it. The 13-megapixel snapper (Sony's IMX258 sensor, PDAF, f/2.0 aperture) is placed on the back of this smartphone, while you'll find an 8-megapixel shooter up front. The 3,080mAh battery is also available here, and it offers 360's fast charging. The company says that this phone's battery can be charged in 90 minutes, and 10 minutes of charging will get you around 3 hours of social networking. The 360 N4 comes with 4G LTE support (VoLTE included), and there are two SIM card slots available here as well. The phone measures 149.09 x 75.79 x 8.47mm, while it weighs 161 grams. On top of all this, the company has announced that the IP7X version of this device is incoming, and that it will be crowdfunded.

The 360 N4 comes in White, Red and Yellow color options, and the registrations in China are already on the way. The device will be available starting May 13th in the country, and the phone costs 899 Yuan ($138), which makes this handset extremely competitive.