Samsung is the largest smartphone manufacturer in the world. The company has been having issues in the past, as their profits started to drop, but this Korea-based giant has found a way back and is doing great at the moment, it seems. The company’s YoY profits grew almost 50% according to the latest info, mainly thanks to the Galaxy S7 and Galaxy S7 Edge flagship smartphones which are in high demand ever since they were announced. We’re not here to talk about Samsung’s premium offerings though, but rather their upcoming lower-end Galaxy J smartphone, read on.

The company has introduced the 2nd-gen Galaxy J5 and J7 smartphones quite recently (back in March), and the two phones have already surfaced on Samsung Spain’s website as well. That being said, it seems like the company is getting ready to introduce yet another Galaxy J smartphone, the next-gen Galaxy J2. The Samsung SM-J210F aka Galaxy J2 (2016) has surfaced on GFXBench earlier today it seems, and thanks to that listing we now know its partial specifications. The device will sport a 720p display, though we still don’t know how big will it be. The 1st-gen Galaxy J2 handset shipped with a 4.7-inch panel, so it is possible the Galaxy J2 will either follow in its footsteps, or will come with a 5-inch display. Anyhow, the phone will be fueled by Spreadtrum’s SC8830 quad-core SoC running at 1.5GHz, along with the Mali-400 GPU for graphics. The Galaxy J2 (2016) will also pack in 2GB of RAM and 16GB of internal storage, while it will ship with Android 6.0.1 Marshmallow pre-installed, and on top of it, you’ll be able to find the company’s TouchWiz UI, of course. The 8-megapixel snapper will be placed on the back of the Galaxy J2 (2016), while you’ll be able to find a 5-megapixel shooter on the phone’s front side.

Please do keep in mind that the Spreadtrum SC8830 processor does not support 4G LTE connectivity, which means that this phone will ship with 2G and 3G support. We don’t know how much will the phone cost, but this will be Samsung’s entry-level offering, which means that it will be quite affordable, just like its predecessor. 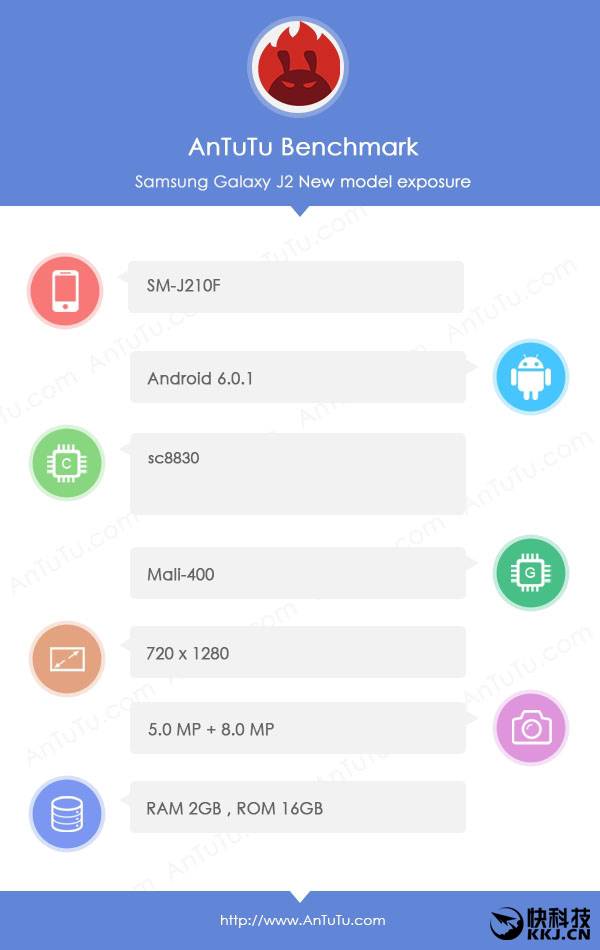