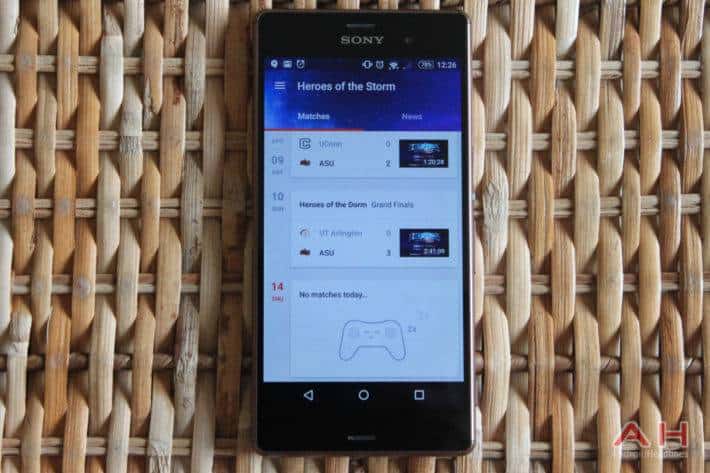 No matter how you slice it, eSports is huge and it's only continuing to grow. The competitive world of gaming gets more action-packed and more fast-paced it seems like every month, and with options for gamers to stream their gameplay like Twitch and YouTube gaming, there are tools to make the viewers feel like they're there inside of the arena. Of course, YouTube Gaming and Twitch aren't just about eSports and are more about traditional game streaming. Yahoo, who already has a strong foothold in the realm of regular sports coverage with their Yahoo Sports app, is now jumping into the eSports arena with their brand-new dedicated Yahoo eSports app that just launched onto Android.

Yahoo eSports is all about coverage on big tournaments for the most popular competitive games in the space right now. At the moment the app only seems to include coverage on CS:GO, Heroes of the Storm, League of Legends, Dota 2, and Street Fighter V. There's no detail on what games will be included beyond these five, but Yahoo has stated that more game titles will be thrown into the mix eventually. This makes it just a matter of when and what for those that are going to be checking out the app.

Yahoo eSports will include more than just coverage of tournaments, and will include live and recorded broadcasts for all games listed, and video quality will be supported in up to 1080p. Beyond broadcast coverage of top events and players, Yahoo's new eSports app will also include highlights from past and current events as well as commentary from reporters and breaking news about the world of eSports. The main page will display the matches that are currently happening, but users can also scroll up to see past matches, and if they just want to catch up on some of the eSports related news they can tap on the dedicated news tab. The main home page for matches will also display details of the current scores for matches, however if you're planning on watching the broadcast recorded after it's over and don't want to know what happened, you can open up the hamburger menu and scroll down to the tools section to disable the score information by tapping on the "spoilers" option. Videos can also autoplay or you can disable this as well. Yahoo eSports is free to install and can be picked up from the Play Store as of now.