Xiaomi has released a couple of devices this year, the company has released their Mi 5 flagship back in February during the Mobile World Congress (MWC), and the Redmi 3 Pro arrived a couple of weeks ago as well. Xiaomi is aiming to improve upon their sales results from 2015, the company has managed to sell around 70 million devices back then, so it is to be expected they will introduce quite a few smartphone before the end of this year. Many people have been wondering whether they will announce the Mi Note 2 soon, and according to the latest info, the company’s all-new flagship phablet will arrive in the second half of 2016.

That being said, Xiaomi might announce a new phablet before the Mi Note 2. I don’t know if you recall, but the company opened up a poll recently and asked consumers to vote on the name of their new phablet. The most people voted for the ‘Xiaomi Max’ naming, so that will be the name of the company’s upcoming device. Xiaomi still didn’t say when will the phone become available, but we do expect it to arrive rather soon, maybe even in H1 2016. Anyhow, we didn’t have any design info about the device just yet, but a new photo leaked in China recently. If you take a look at the provided images, you’ll get to see the alleged photo of Xiaomi Max’s 6.4-inch panel. If this info is accurate, Xiaomi won’t included a physical home button / fingerprint scanner up front, but will revert to their usual setup (menu, home and back capacitive buttons). The rumors claim that this device will ship with a 6.4-inch QHD (2560 x 1440) display, and that it will be fueled by the Snapdragon 820 64-bit quad-core SoC, and the Adreno 530 GPU. Well, it would be nice if Xiaomi included such specs, but if they intend on releasing the Mi Note 2, chances are Xiaomi Max will be a mid-range offering, but we’ll see.

That is more or less it, we don’t have any more info at this point, unfortunately. It is to be expected, however, that the Xiaomi Max will ship with Android 6.0 Marshmallow out of the box, and Xiaomi’s MIUI OS will be installed on top of Google’s operating system. Either way, stay tuned. 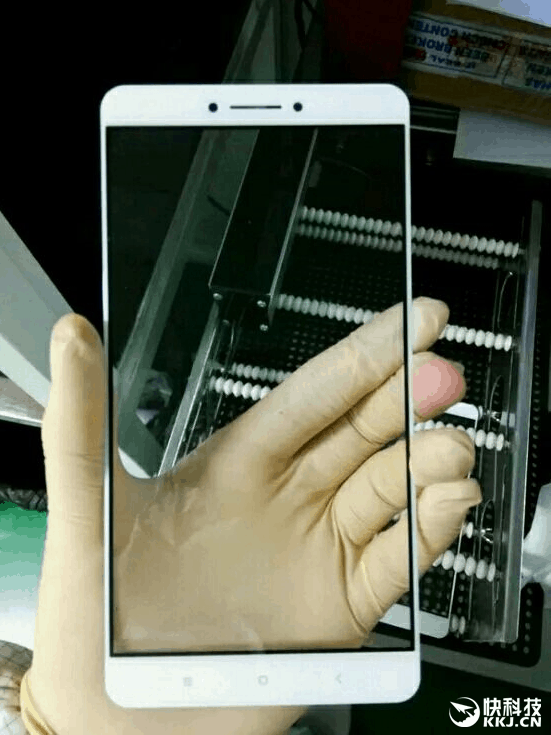