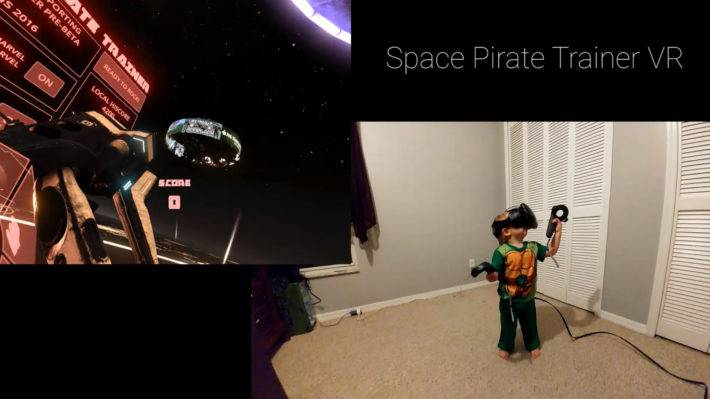 The HTC Vive is the latest in virtual reality headsets on the market, launching alongside major competitor Oculus Rift.  The Vive sports a unique looking design that's not too dissimilar to other VR headsets out there, but sports some pock marks on the unit that mark one massive differentiating factor between it and every other VR headset on the market; the ability to use room-scale tracking.  This means you can actually walk around and interact with the virtual world, not just strap a headset on and get a 360-degree view of what's around you.  This revolutionary new method of interacting with the virtual world means it's more realistic than any other VR solution out there, and works to truly trick your brain into thinking you're actually there.

So what happens when a kid, namely one as young as 2 years old, puts said headset on?  The reaction is priceless, and it also speaks volumes about the fine job HTC and Valve have done in designing the VR experience here.  It's surreal to watch adults using the Vive, coming out of it like they've had a religious experience or something similar, but a child tends to think in much more unrestricted ways than an adult does.  As a disclaimer to any controversy this might stir up, we've only allowed our 2 year old in this video to use the Vive a few times, and at that restrict him to just 5 minutes of usage a day.  This isn't Caprica or some other sci-fi series about virtual reality addiction, and we're here to make sure that it never turns into that for him.

Regardless though it's incredible to see how immediately he adapts to the world that's created in the headset.  On top of making games even more realistic and interactive than they've become over the past handful of decades since the first Atari hit home entertainment shelves, the HTC Vive seems like it could provide some incredible new educational possibilities that just weren't possible before.  Walking around the ocean floor exploring unseen flora and fauna, traveling to the deep reaches of space and everything inbetween is now possible thanks to the technology provided in the Vive, and it's nothing short of amazing to see the massive age range that this device can appeal to.  Check out the video below to see the Vive in action and how my 2 year old reacts to what's around him.