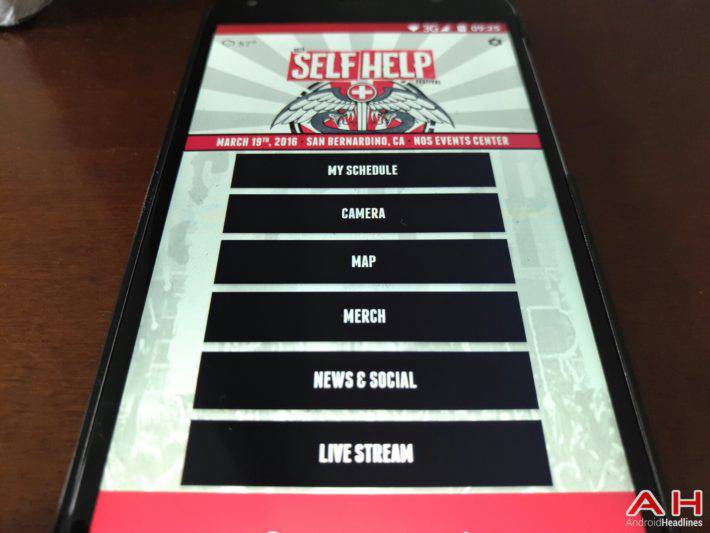 Google Play Store is home to many, many apps at this point. We talk about new applications every day here on the site, and even though it's hard to innovate these days, we do get to see some interesting apps being release still. Well, we're not here to talk about any innovative app this time around, but those of you who enjoy good music and live in the US might actually be interested in this article, read on.

I don't know how many of you heard of an event called 'Self Help Fest'. This is an annual music festival in San Bernardino, California, which features a number of bands, and is quite popular in California. Now, the 2016 Self Help Fest was hosted back in March, and was a smashing success. Well, we didn't get a chance to talk about this sooner, but the official Self Help Fest application si available in the Google Play Store, and even though it's not as popular (nor did anyone expect it to be considering its nature), it currently has 36 reviews and holds a 5.0-star rating. This application won't be interesting to many of you, which is understandable, but those of you who have been planning to go to the Self Help Fest, or simply want to look back at what happened last month, well, this might be just the right app for you. The design of this app isn't all that important in the grand scheme of things, but you'll be glad to hear that the app is easy to navigate, and is also pleasing to look at, which are great news.

The Self Help Fest app has been developed by Aloompa, LLC, a developing company which actually has tons of similar apps available in the Google Play Store already, so they have plenty of experience in this area. This app is completely free to download and use, though you can check out some of the Self Help Fest official merchandise through it, if you want. That's pretty much it, there are several official images available in the gallery down below, and if you'd like to download the app, click on the Google Play banner which is located below this article.